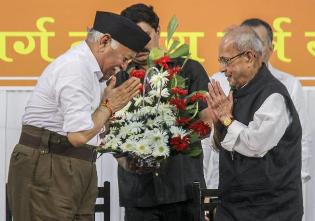 Editor-in-Chief of indiacommentary.com. Current Affairs analyst and political commentator. Writes for a number of publications. View all posts by this Author
Debate and discussion are cornerstones of democracy. A closed or pre-set mind is not likely to give much importance to the thoughts of others. Hence, it was good that the RSS invited Pranab Mukherjee to speak at the passing-out parade for its trainees at its headquarters in Nagpur and it was great that Mukherjee accepted, despite having spent a lifetime opposing the sectarian ideology of the saffron organization. At one level, the event showed that the RSS wants to have dialogue with people not enamored with its ideology while on the other it showed that at least some liberals do not treat the saffron unit as pariah and are willing to go by democratic traditions of engaging with those who hold views inimical to their own.

In the end, Pranab Mukherjee said what was expected of him. He pointed out to the RSS that their insistence of India for the Hindus is not right because the nation was not built on one identity or religion. He said that any attempt at defining our nationhood in terms of dogmas and identities of religion, region, hatred and intolerance will only lead to dilution of our national identity. He reminded RSS cadre that nothing should be done to divide the people and the diversity of the nation should be celebrated.

The RSS is reputed to infuse its trainees with anti-minority venom. Here was a person, an ex-President of the country, telling them exactly the opposite. It is doubtful that committed members of the Sangh would put much importance on what Mukherjee preached, but at least they got to hear a view different from what is being taught in sakhas. In essence, what Mukherjee told them was that even if they believe in Hindus first, it should not mean that all others living in India must be crushed or made to feel second class citizens.

Much is being made of the fact that Mukherjee called RSS founder K B Hedgewar a great son of Mother India. But is he not a great son of the country? Or only liberals can be called that? This shows that strains of intolerance run on both sides of the political divide. Whatever his views, Hedgewar built a huge organization and mobilized people for the country. Even if his brand of nationalism is sectarian and not palatable to everyone, the RSS does huge work in the field of education and health. If those who believe in outsourced ideologies can be great sons of India, Hedgewar definitely is one, whether one agrees with his ideology or not.

Then, Mukherjee is being criticized for not bringing up Mahatma Gandhis assassination and RSS role in it. If one goes through the entire speech, it becomes clear that Mukherjee fully repudiated the thought that was behind the assassination or the celebrations that followed. Was it necessary then to name the event? The main critic is Sitaram Yechury of the CPIM. When was the time one heard Yechury talk about the mass murders committed in the name of communism by Lenin, a person the communists hold in high esteem?