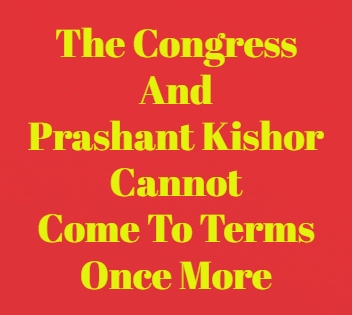 Prashant Kishor Will Not Be A Congressman After All

Prashant Kishor Will Not Be A Congressman After All

It was not a marriage made in heaven. The Congress and Prashant Kishor have not taken the vows and Kishor has declined the offer of the party to be a part of the empowered action group citing leadership issues. After almost a week of discussions at the highest level during which Kishor is reported to have made another presentation (he had made one last year too) to the party on the way forward, India's most successful poll strategist and the second largest national political party (which is in decline since 2014) could not agree on the exact way Kishor could help the party. While nothing is permanent in politics, it does seem that they are unlikely to engage each other any further after two separate rounds of failed talks in one year.

There is huge resistance in the party against Kishor joining in an important capacity and being given a free hand. This was bound to happen. The Congress is a party of hangers-on. It does not have mass leaders. Many so-called leaders who occupy top posts at almost all levels have seldom contested elections. They are the creation of the patronage bestowed on loyalists by the party high command. In the present political scenario, these 'leaders' fail to inspire confidence in party workers, let alone the common man. In his presentation, Kishor is reported to have called for sidelining these leaders and developing new mass leaders. He is also reported to have called for a change in the top leadership with a non-Gandhi heading the party. Obviously, the party is not ready for such wholesale changes mainly because it would lessen the hold of the Gandhis.

It seems that the Congress has decided that it will itself do what is needed to turn the party around. It is perhaps also working on the TINA (there is no alternative) factor at the national level and thinks that once the people get disenchanted with Narendra Modi they will once again turn to the Congress. But it forgets that in state after state, regional parties have taken over the Congress space and the AAP is threatening to do so at the national level. Except for Rajasthan, MP, Chhattisgarh, Uttaranchal and Kerala to some extent, there are not many states where the Congress can hope to get Lok Sabha seats. Even in the mentioned states, it is not the main party and that is why its tally has been below 75 in two successive general elections.

Even if it does not take Prashant Kishor's help, the Congress must realize that it needs a complete transformation in order to challenge the BJP. This must begin at the top with a full-time, non-Gandhi working president. It needs to develop mass leaders who can motivate party workers. At state level, it needs leaders who can reinvigorate the party set up from booth level. In short, while at the top it needs a leader who can effectively counter Modi, in the middle and at the bottom it needs leaders who can fight effectively against the well-oiled election machinery of the BJP. This is a tall order and beyond the capacity of a party that depends totally on one family to guide it in all things. But if the Congress does not try, it will be the biggest let down in Indian democracy.