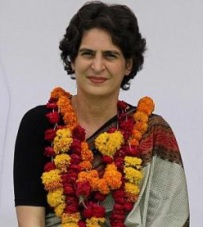 Editor-in-Chief of indiacommentary.com. Current Affairs analyst and political commentator. View all posts by this Author
Priyanka Gandhi Varda has finally taken the plunge. She has joined active politics and brother and Congress president Rahul Gandhi has promptly appointed her as the general secretary of the party, in-charge of UP (East), the home turf of state chief minister Yogi Adityanath which includes Varanasi, the Lok Sabha constituency of Prime Minister Modi.

Priyanka has always been on the fringes of politics and has been assisting Sonia and Rahul ever since the death of Rajiv Gandhi. This is just the official formalization of her role. But since it comes at this point in time, it confirms several things. The first is the fact that having been reduced to fewer than 50 seats in the 2014 elections by the double strike of a dominant BJP and the rising regional parties, the Congress has recognized that the coming elections are going to be a do-or-die battle for the party. Hence, it wishes to use everything in its armoury to try and win the battle. Further, in UP especially, the party has recognized that it has its back to the wall after the SP-BSP combine has ignored it totally. It also underlines the fact that the party has chosen to ignore the dynastic rule barbs which Modi throws at it and has inducted the only remaining member of the family in the battle.

But having Priyanka in the party can be a double-edged sword. While the party can hope to get the advantage of the Gandhi name, it is doubtful whether the name carries positive vibes any more with the largely young voters that comprise the electorate now. Then, with her husband Robert Vadra accused of having a hand in many land scams in Haryana, it would immediately make her the target. Modi has been going after the son-in-law off and on. Now these attacks will become more pronounced and personal.

Rahul has said that Priyanka is very capable and hardworking. Further, the Gandhi name still opens many doors in officialdom. In that sense, Priyanka can be an asset on the ground, especially in the high profile UP (East) area. But with the Congress workers in UP (except perhaps in Amethi and Rae Bareilly) totally down and out, Priyanka will have to use a magic wand to invigorate them and provide any kind of fight in the three-cornered contests that are likely to happen in the state, let alone win seats for the party. With Congress getting just 7.53% of the popular votes in 2014 elections and with nothing on the ground suggesting a renewed support for the party, Priyanka is in for a long haul.