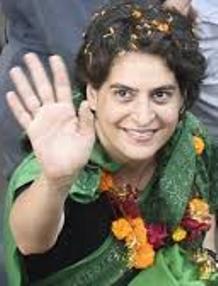 Priyanka Turns Tail, Not To Contest In Varanasi

Priyanka Turns Tail, Not To Contest In Varanasi

Editor-in-Chief of indiacommentary.com. Current Affairs analyst and political commentator. Writes for a number of publications. View all posts by this Author
From Sunil Garodia in Varanasi

As I reached the holy city of Kashi today, the first news I received was that the Congress had decided not to field Priyanaka Vadra against Narendra Modi from Varanasi. It had decided to nominate old warhorse Ajai Rai (who contested against Modi in 2014 too). When the news started doing the rounds that Priyanka might contest from Varanasi, I had written (Will Priyanka Smile Her Way To Varanasi) that the Congress will not field her.

The categorical assertion was based on two simple calculations. The first was that the numbers were against her in a three-cornered fight and if the alliance did not leave the seat for her, there was no way she could even put up a decent fight. The second was that the Congress would never field a family member from anywhere else but a safe seat where the chance of winning was more than 90 percent (for there are not many 100% seats left for the party now)

Priyanka Gandhi and Rahul Gandhi indulged in a lot of play acting whenever the question of the former contesting against Modi was raised by journalists. But it was clear that given the massive support the BJP in general and Modi, in particular, has in Varanasi, there was no way Priyanka was to be made a sacrificial lamb. The Gandhi family does not work that way. Their scions are inducted in politics from safe seats and rare is a Hemavanti Nandan Bahuguna who can put it across the likes of Indira Gandhi.

The first family of the Congress does not believe in scoring points or pinning down star opponents to one constituency by fielding heavyweights against them. If the heavyweight happens to be a member of the first family, the Congress does not take any chance. What if the Scion gets depressed if he or she receives a massive drubbing? Who will carry forward the family name? Priyanka Gandhi will in all probability take over the mantle from Sonia if and when she retires from politics and will contest from Rae Bareilly in future.