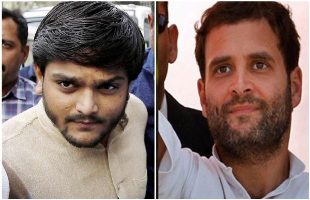 Rahul and Hardik: Together or Not?

Rahul and Hardik: Together or Not?

Editor-in-Chief of indiacommentary.com. Current Affairs analyst and political commentator. Writes for a number of publications. View all posts by this Author
Although the Congress must be gloating at having sealed a seat-sharing agreement with Hardik Patel and must be thinking that the Patidar votes are in its bag after this, things are not as rosy as they seem. The ground reality is quite different. For, Hardik Patel, despite being the most famous face of the Patidar movement, is not the sole decision maker for them. This is evident from the fact that just the day after the seat sharing pact was announced, workers from Patels group PAAS attacked Congress party offices in Surat, allegedly because some leaders names had been included in the joint list without their consent. This means that lower rung leaders do not see eye to eye with Hardik Patel over the agreement with Congress. It also means that there is going to be more trouble unless Patel shows that he is the undisputed leader of the group.

The importance of lower level leaders  the ones who bring the donations and arrange for the musclemen  cannot be discounted. They have their ear to the ground and know the pulse of the ordinary workers and the people. Although the Congress and Hardik Patel are trying their best to avoid splitting of votes by sharing seats, local compulsions might derail their plans. Hardik Patel is a relatively newcomer to politics. Despite his obvious appeal, as evidenced by the throngs that attend his meetings, it remains to be seen whether the local leaders who have been toiling for years for the common people, will agree with all his decisions. Further, the BJP will always try to throw a spanner in the works.

That things are not as hunky dory as being made out by Patel and the Congress is evident from the fact that Dinesh Bhambhani, a member of the core committee of PAAS, has said that since the Congress has announced the names without their permission, they will launch a state-wide agitation against it. Since Bhambhani is in the core committee, it goes without saying that he must have been a party to the negotiations with the Congress. Why the difference, then? Or is it that Hardik Patel has assumed the cap of prima donna and is doing things by himself? If it is the former, then Bhambhani and others seem to have fallen out with Patel. If it is the latter, then Patel will have to prove that his supremacy in the group allows him to take unilateral decisions. In either case, the loser will be the Congress if things are not patched-up between Patel and the other PAAS leaders soon.