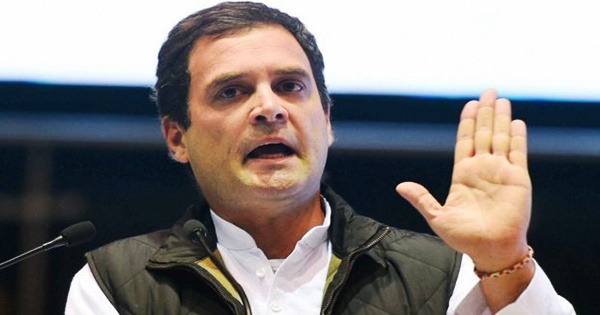 Rahul Gandhi showed remarkable statesmanship this morning. Commenting on the Kashmir situation, the Congress leader tweeted that although he differed with the Modi government on many things "Kashmir is India's internal issue & there is no room for Pakistan or any other foreign country to interfere in it."

He further tweeted that "there is violence in Jammu & Kashmir. There is violence because it is instigated and supported by Pakistan which is known to be the prime supporter of terrorism across the world."

Rahul Gandhi has done well to reiterate India's long-standing policy that Kashmir is its internal matter. He also did well to name Pakistan as the chief instigator of violence in the state. Ever since the government read down Article 370 to do away with the special status enjoyed by the state, all of the statements made by the Congress, and Rahul, were lapped up by the Pakistani government and the media in that country to show that the Indian opposition parties had vehemently opposed the move. Their statements were used to make a case for Pakistan and approach the UN and other multi-nation platforms.

With this statement, Rahul Gandhi has partially undone the damage. He has clarified that although his party did not agree with the manner in which the government acted; India had the sole right to decide what it will do with Kashmir as it is its internal matter. He has also recognized that the violence in J&K is primarily because of terror implants by Pakistan.

There come times in the history of a nation when some momentous decisions are made by the government of the day. It is foolish to hope that all shades of political opinion will accept those decisions without demur. But opponents of the government's move must not provide fodder to the nation's enemies by their inflammatory statements. When people derisively say that the Congress is "pro-Pakistan" it is only because Congress leaders make statements that harm the nation, and are lapped up by the government of Pakistan and the media there, in order to demonize Modi. But Rahul Gandhi's latest tweets show that a course correction is underway, which is good.

Several Congress leaders have been advocating that the party must stop demonizing Modi by criticizing his every move. This, they say, reduces their credibility and people do not take them seriously even when they criticize his bad decisions. Shashi Tharoor, one such leader, was quick to compliment Rahul Gandhi on his latest tweets. "Spot on, Chief! This is what @INCIndia has insisted all along: J&K is an integral part of India; we opposed the manner in which Art.370 was abrogated because the way it was done assaulted our Constitution & democratic values. No reason for Pak to draw any comfort from our stand." Rahul Gandhi will be better placed to take on Modi if he listens to these leaders. Criticizing Modi's every move has definitely reduced the credibility of the Congress.