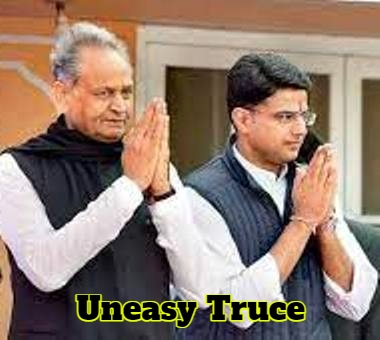 After the trusted aide of the Gandhi family and senior Congress leader K C Venugopal flew into Jaipur to oversee the preparations for the Rahul Gandhi yatra that is slated to enter the state on December 4, he is reported to have spoken to both chief minister Ashok Gehlot and his bete noir Sachin Pilot to defuse the tensions that were simmering between the two camps after Gehlot had called Pilot a 'gaddar' in a recent interview to ndtv.com. The result was that both leaders stood on the same platform to brief the press about the preparations for the yatra. Both stressed that the party is supreme and that the yatra will be welcomed with maximum energy in the state.

With this, it seems that the fireworks expected after the Gehlot interview will not materialize till the yatra is over. After Rahul Gandhi called both the leaders assets to the Congress and after Venugopal intervened, perhaps with a special message from Sonia Gandhi, both Pilot and Gehlot have receded to their corners temporarily. But this is an uneasy truce and the party will have to do a lot of firefighting before the assembly elections next year.

But in Rajasthan, it now seems that the Pilot camp has been clearly outsmarted and heavily reduced in strength by the wily Gehlot. Hence, Sachin Pilot is in no position take on the chief minister. Still, a seasoned politician like him will not take the insult lying down and even though he has backed off right now, he will strike at an opportune time. If he finds it suffocating to remain in the party, he might look at other options. The fact is that the people of Rajasthan never vote the incumbent back to power since the 1990s. If the trend continues, Congress will make way for the BJP in 2023. Pilot has time till the state elections in 2023 to decide what he wants to do.