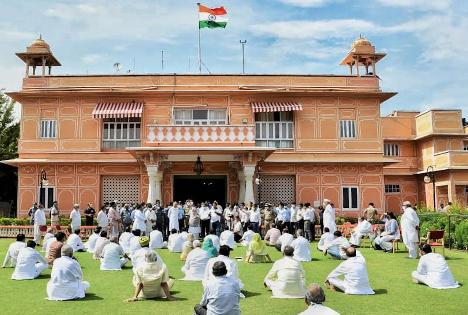 Rajasthan: The Path Of Confrontation

Rajasthan: The Path Of Confrontation

After not getting any immediate relief from either the Rajasthan High Court or the Supreme Court and not being able to disqualify the MLAs loyal to Sahin Pilot, the Congress has changed tack and instead of taking any further legal route has decided to up the ante and corner Governor Kalraj Mishra for not summoning the assembly session despite the state cabinet's recommendation. MLAs belonging to the Ashok Gehlot camp held protests in the lawns of the Raj Bhawan in Jaipur, prompting the Governor to raise questions about law and order.

The Governor, on his part, says he will go by the constitution and has asked for clarification from the government. After receiving the Governor's missive, Gehlot held a marathon cabinet meeting at his home and passed a resolution asking the Governor to summon a session of the assembly. The Governor had asked the government to clarify when it wants (the date) the session to be convened, provide justification or agenda to convene a session at such short notice bypassing the 21-day norm, assure free and safe movement of MLAs, take cognizance of ongoing court cases, do things as per norms and maintain proper decorum and if the government already enjoys a majority as claimed by it, the justification for seeking a vote of confidence. The Rajasthan government has decided to send a revised proposal to the Governor after addressing all his concerns. Although all the points raised by the Governor are valid and are backed by the powers he enjoys under the constitution, there are murmurs that Kalraj Mishra is playing for time.

But time is what Ashok Gehlot does not have on his hands. He knows that if the court allows the Speaker to disqualify the 19 MLAs belonging to the Sachin Pilot camp he will sail through in the vote of confidence as the majority mark will come down to 91. But as that seems unlikely as of now with the Rajasthan High Court ordering status quo and the Supreme Court seized of the matter (the hearings in the apex court might be prolonged as the Centre has been made a party to the case and the larger constitutional question of the powers of the Speaker will be decided concurrently). Gehlot is trying other ways like proving his majority as of now. Gehlot knows that the 102 MLAs he claims are supporting him now can switch sides and any vote held thereafter can bring down his government. So he wants to prove his majority in the house and be safe for the next six months. He also knows that once his government is safe for six months, some of the MLAs from the Pilot camp might return, further strengthening his hand. But for that to happen the Governor will have to play ball and he does not seem to be in the mood for it. The stage seems to be set for another ugly confrontation between the elected government and the titular head of a state.