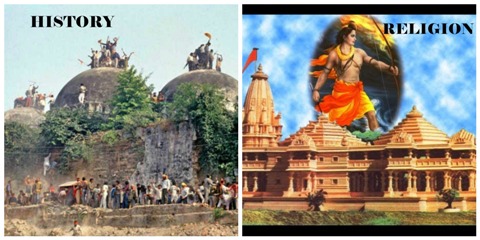 Ram Mandir: History Should Not be Obliterated

Ram Mandir: History Should Not be Obliterated

Editor-in-Chief of indiacommentary.com. Current Affairs analyst and political commentator. Writes for a number of publications. View all posts by this Author
The Supreme Court has observed that since the Ram Mandir issue is very sensitive, if possible it should be settled out of court through negotiations between concerned parties. The court has also said that a sitting SC judge can act as a mediator, if needed. Politicians and social leaders across the spectrum have welcomed the courts observation. Some have pointed out that previous meetings between the parties had yielded little and hence, a solution cannot be expected in a hurry.

The Supreme Court has made a sane observation. The sensitive issue involves religious beliefs, mythology and history and should be settled by both the communities through negotiations. But both sides have rigid stands that have not changed, in fact hardened further, over the years. No side is ready to be flexible. Any meeting will witness the repetition of old stands and heated arguments, but nothing will come out of it.

When the Allahabad High Court had settled the ownership of the disputed land by giving most of it to the Hindus, it kept a small 60 feet by 40 feet parcel for the Muslims. That order has now become the bone of contention. In any case, the Hindus say that Ayodhya is Ram Janmabhoomi. They claim ownership over the whole town. They say that in the 15th century, Babar had destroyed Hindu heritage when he conquered the town by replacing most of the monuments with other buildings, including the Babri masjid in place of Ram Mandir. This is a religious belief held by a majority of the Hindus. How do you counter that?

Since land records were not kept in the age of Babar and in any case that was a different era when the conqueror held all, the ownership cannot be proven conclusively in court. What will be proven as owned by the Muslim bodies will be challenged as conquered space by the Hindus. The courts cannot go beyond the time from when land records are available and the Hindus are claiming ownership much before that. Hence, there is no way the courts can decide the matter as per existing laws.

No country can deny or do away with its history. If it is a fact that Ayodhya was the birthplace of Lord Ram, it is also a fact that Babar ruled over India. It is certain that given that Ayodhya was the capital of the kingdom that Ram ruled over, it must have had majestic buildings. It is also certain that since Babar was a foreigner who conquered India, he must have razed these buildings to construct mosques in their place in order to propagate Islam. Now, the question is, should we wash away Indian history and believe Babar never came to India? Should we replace all heritage buildings of the Muslim era with new Hindu monuments and teach our children that Muslims never ruled over us?

Although Hindus felt triumphant when the Babri masjid was destroyed, what they did not understand was they were destroying a part of their history. I am not for a moment saying that the Ram Mandir should not be built at Ayodhya. As a Hindu who has spent his childhood being told about the glory of Ram Rajya, one cannot hold a different view. There should be a grand monument to Lord Ram at his birth place. But at the same time, I am not willing to negate the history of my country. Ram is my belief and Babar is history. People should learn from history. If Babar could conquer India, it was because Indians were divided and weak. By obliterating that part of our history, we are creating conditions when our future generations will not learn anything from it. Should we let them think that there was always Ram Rajya in India?

This is the spirit with which both sides should approach the talks, if there are to be any. The Hindus should understand that they should not and cannot negate history. The Muslims should understand that Ram being the biggest Hindu icon, they cannot let a conquerors ownership come in the way of restoring Hindu pride. Subramanian Swamys formula of having the Ram Mandir where Hindus desire and having a mosque on the other bank of the Sarayu river seems good. That way, devotees visiting the temple would be reminded that although there was Ram Rajya in India, there was a period when we were subjugated by foreigners. Religion and history will co-exist peacefully. But reading the statements of leaders of both the communities post the SC observations, I think that it will not work out that way. That would be a tragedy.