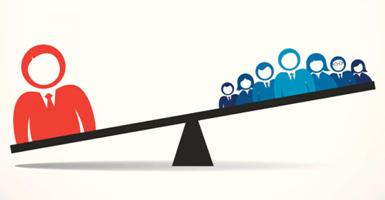 Revolt Against Capitalism Or Against The Politician-Bureaucrat-Businessman Nexus?

Revolt Against Capitalism Or Against The Politician-Bureaucrat-Businessman Nexus?

Editor-in-Chief of indiacommentary.com. Current Affairs analyst and political commentator. Writes for a number of publications. View all posts by this Author
Former governor of the RBI, Raghuram Rajan, is right in saying that capitalism is under serious threat because its stopped providing for the many, and when that happens, the many revolt against capitalism. Rajan believes that governments cannot ignore social inequality when considering the economy. But Rajan perhaps forgot to mention that more than the inherent attributes or alleged failings of capitalism, at least in India it is the politician-bureaucrat-businessman nexus and widespread corruption that is ensuring that the rich get richer.

If one takes India as the example, one sees that after the reforms began in 1991, the overall quality of life may have improved for many but at the same time, the inequality between the rich and the poor has increased by leaps and bounds. Also, there are communities and people who are faring worse than before. The top 10 percent in India control 74% of its wealth while the bottom 10% has only 0.2%. The rich continue to grow richer while the poor remain the same or even become worse off.

Rajan is also right in saying that in the past one could get a good job with modest education. But now even a modest job with a good education continues to elude people. The absence of opportunities means that the middle and the poor classes are becoming dissatisfied with the system and as Rajan says, might revolt against capitalism. But one feels that in India, the revolt should ideally be directed against those who (mis)govern and not against capitalism.

What is happening, especially in India, is regrettable. On paper, dismantling the licence-quota raj should have led to a burst of opportunities and unlocking of the entrepreneurial spirit. It should have led to rising aspirations. Although both things have happened, the pace of rise of the high to higher has far outpaced that of medium to high or low to medium. Hence, although India keeps adding millionaires, the number of the poor also keeps growing. Further, such is the structure of Indian polity that those who profess to serve and work for the poor extract a huge price for doing so as their tribe continues to grow rich at an amazing rate. Even local level politicians and their cronies amass amazing riches in a very short span of time.

Ideally, capitalism creates the infrastructure that leads to the creation of wealth for both the investor and the nation and creation of jobs, contracts and downstream projects that benefits people down the social ladder. Then, under corporate social responsibility (CSR), profit-making companies are expected a share a percentage of their wealth with the community by investing in non-profit welfare projects. Finally, charity conscious entrepreneurs often donate large sums for the welfare of the poor.

But since income inequality keeps growing, it is obvious what is being done is both not correct and not enough. Although it is an old saying that money begets money, the power of money makes it dangerous for it to be concentrated in a few hands. The solution is not to tax the rich at a huge rate as that would crush the entrepreneurial spirit and the incentive to invest and might lead to a flight of capital. The solution is also not in confiscating the wealth of the super rich and distributing it among the poor. The solution lies in creating a good social infrastructure to keep our human resource well-fed, healthy and educated. The solution lies in modernizing agriculture, removing middlemen and providing farmers with a supply chain solution for them to get a remunerative return on their produce. The solution lies in arresting the brain drain. The solution also lies in providing jobs and business opportunities for the middle and poor classes. Above all, the solution lies in dismantling the politician-bureaucrat-businessman nexus that allows the cornering of resources by the well-connected and gives birth to crony capitalism which is one of the biggest reasons for the existence of income inequalities.