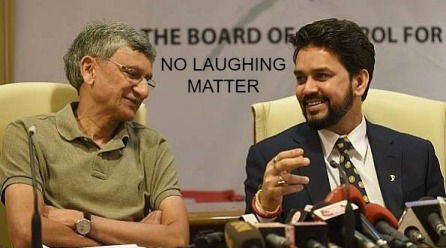 Editor-in-Chief of indiacommentary.com. Current Affairs analyst and political commentator. Writes for a number of publications. View all posts by this Author
BCCI's defiant attitude was wrong
The BCCI case must go down in legal history as a case where a registered society had the temerity to refuse to follow the orders of the apex court and the leniency that the court bestowed on it. But everything has a limit. Instead of a defendant following a court order, the country saw the disgraceful spectacle of BCCI officers argue  even accuse the court of bias  that they were not entitled to follow the July 18 order and it was left to the court to enforce its previous order by sacking errant officials of the BCCI. After several warnings that if the BCCI was unwilling or unable to implement the Lodha Committee recommendations, the court will either ask the committee to implement them or appoint court officers to do the needful, the apex court has now acted. It has removed both Anurag Thakur as president and Ajay Shikre as secretary of the BCCI. The order is for them to cease and desist from performing any duties of the organization. The court has asked the amicus curiae Gopal Subramaniam and senior advocate Fali S Nariman to suggest names of administrators to be appointed to run the BCCI. The court will hear the matter on January 19. Additionally, Anurag Thakur has been charged with perjury for lying to the court in the matter of sending a letter to the ICC, seeking their help in avoiding the implementation of some of the Lodha Committee recommendations, especially the one related to having a representative of the Comptroller & Auditor General of India (CAG) on its board.

Opaque memorandum and shady practises were its undoing
No individual, company or organization is above the law of the land. Court orders supersede anything that might be written in any personal deeds of individuals or memorandum and articles and rules and regulations of all companies and organizations in the country. This is for the simple reason that the court passes orders after examining the legality of the said documents and would never pass an order that would be illegal. By saying that as a legally registered society, the BCCI was bound to follow its own memorandum  which was in conflict with the Lodha Committee recommendations  the organization failed to understand that since the apex court had deemed it to be a body that performed state like functions and that was amenable to the writ jurisdiction of High Courts, the court was asking it to implement the committee recommendations as it found its memorandum opaque and not in public good. The very fact that the court appointed the Lodha Committee showed that it found BCCI working in a manner that did not befit its total control and monopoly in running the game of cricket in India. BCCI was being run as a closed club where back scratching, building up power centres by not having any retirement age for officers, not letting fresh talent or outside experts in, dispensing favours to keep state associations in good humour, seeking political and bureaucratic patronage by allowing politicians and bureaucrats to occupy high posts, conducting multi-billion dollar deals without following procedures, holding meetings in cavalier fashion where unanimity and consensus rather than contest ruled and treating large parts of the country  especially the North-East  in a step motherly manner and its attitude showed that it considered itself above the law. This was possible only because cricket had a huge following and BCCI coffers were always overflowing. Hence politicians and bureaucrats fell over each other to control things and not leave it to unattached individuals. But BCCI always had the power without the concomitant responsibility. It led to people getting greedy, the advent of conflict of interest and the subsequent focus of the apex court, leading to the present order.

Not the best, Mr Thakur
In his statement after the Supreme Court order today, Anurag Thakur has said that BCCI is the best managed sports organization in the country with defined procedures. India has the best cricket infrastructure, built and maintained by the state associations with help from the BCCI. India has more quality players than anywhere in the world. The word best as used by Thakur is best according to him and the BCCI. Obviously, the apex court thought it could be better. In any case, if BCCI is arguably the best managed sports organization in India, it is only because public support and the resultant cash flow allow it to have the best of everything. Still, it has shied from appointing outside experts to advise it on best practices being followed in sports organizations around the world. It has steadfastly refused to let anyone have a peek into its internal machinations. If it was not for a disgruntled and now unrecognized Cricket Association of Bihar, people would have never come to know how BCCI officials were eating their cake and having it too by owning IPL teams while running the cash spinning tournament. What Thakur calls best can certainly be much better with transparency and infusion of both expert views and fresh ideas. The pool of quality players that Thakur talks about can be augmented further if all states in India were given equal emphasis in promoting the game, which can only be possible if each state has one association and one vote. The state of Maharashtra, for instance, has four full members in Mumbai, Maharashtra, Vidharba and Cricket Club of India. Doesnt having four votes swing many a thing in the favour of the state? Do they not get four times more money than states that have only one association? Further, there is bias in distributing funds  and this was noted by the Supreme Court in its observations during a hearing in April 2016  indicating that some associations were favoured over others. If this is how the best managed sports association conducts its affairs, one is glad that the apex court has put an end to it.