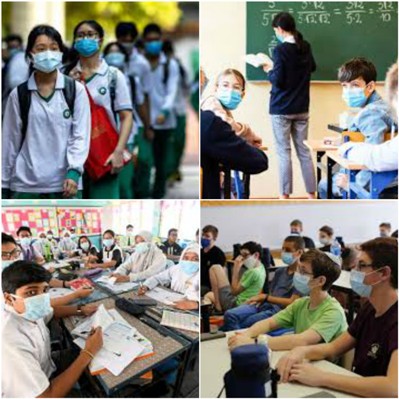 A couple of days back, the Centre has asked the states to reply, after taking feedback from parents and other stakeholders, about when they think that schools should be reopened. All schools, colleges and training and coaching institutes across India have been closed since the middle of March due to the pandemic. The government took a conscious decision not to reopen educational facilities even when the unlocking started happening in May. For, there are several extremely risky factors involved in permitting the same despite the fact that the learning process is being derailed and students are losing valuable time in the academic calendar and are getting increasingly cranky by staying cooped up at home.

Any educational institution has an assemblage of people - students, teachers, support staff and suppliers - who come from long distances, either within the city or from the suburbs, often using multiple modes of transport. While some of them commute by private vehicles, a majority either avails public transport or the transport provided by schools. Since public transport is not fully operational in most Indian cities and suburban trains and the Metro have not been made operational as yet, it will be very stressful for parents to send their wards to schools. Unless a decision is first taken on starting suburban train and Metro services, schools should not be reopened. The question of schools maintaining the necessary infrastructure to screen such a large number of people on a daily basis must also be looked into.

Then there is the question of overcrowding. Most schools in India - even some of the elite ones - have cramped classrooms where 40 to 60 students are made to sit three to a bench. It will be extremely difficult to maintain physical distancing norms. The way out would be to have a two day week for each student - allowing only 33.33 percent to attend class any day - with schools opening 6 days a week. But that would mean that teachers would have to repeat the same lesson to a different set of students throughout the week. That would make their job boring and make them lose interest. It would also mean that there is no way the entire learning process for any standard would be completed within the academic year. If that be the case, then why reopen schools now with all the attendant risks? Why not think of alternate ways to assess and promote the children to the next standard?

It is true that the underprivileged children are losing out on mid-day meals and for most others, either lack of, or uncertainty of, seamless and fast internet connectivity makes online study a tiresome job. Then, reducing the syllabus in a selective way shows that the government is pushing through a harmful agenda. The government must recognize that troubled times call for innovative solutions. It must study the experience of other countries like South Korea and Japan, to name just two, before taking any decision on reopening schools. The considerations of health, safety, nutrition and psychology, though extremely important, need to be balanced with the question of having to provide education to come up with a viable solution. Reopening educational institutions without having proper checks and balances in place would be a sure recipe for disaster and might usher in community transmission in India earlier than otherwise expected. More importantly, children will be the ones who will suffer the most.