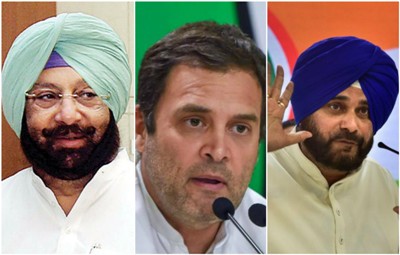 Navjot Singh Sidhu is up to his old tricks. He has resigned as a minister from the Punjab cabinet. But instead of submitting his resignation to the chief minister Captain Amarinder Singh, Sidhu is supposed to have sent his letter to Rahul Gandhi as far back as June 10th. Sidhu is too seasoned a politician to know that any resignation from the state cabinet is effective only if sent to, and accepted by, the Governor or the chief minister. Any other way of resigning is just dramabaazi.

But isn't Sidhu a champion in theatrics? His main purpose is not to resign but to create pressure on the chief minister who had demoted him in the recent cabinet reshuffle. He was divested of the local bodies, tourism and cultural affairs portfolio and moved to power and new and renewable energy department. He had not taken up the charge of his new ministry ever seen he was shifted to it. He knew that if he submitted the resignation to the state Governor or chief minister it would have been accepted. Hence, to put pressure on the chief minister he sent it to Rahul Gandhi.

Since the Congress is in turmoil right now, with Rahul Gandhi no longer the president, Sidhu's devious plan did not succeed. Having no alternative, Sidhu now says that he will send the resignation letter to the chief minister. Sidhu is known trouble-maker. The trouble with him is that he can't see beyond his nose. Further, he is being used as a pawn in a game of wits between the Gandhi family and the Punjab chief minister. Hence, Captain Amarinder Singh should accept his resignation and send him for a longish cooling-off period.

Further, why did he choose to make the resignation letter public now, one month after sending it? Does it have anything to do with his meeting with Rahul and Priyanka a couple of days ago? Is it also connected to Captain Amarinder Singh's recent comments that someone young should be made Congress president? The family obviously wants a stop-gap president to keep the seat warm for Rahul, who will return once the shame of a crushing defeat fades away. The Congress is known to clip the wings of influential state leaders who are a threat to the family. Is the family trying to cut the Captain to size by using Sidhu?