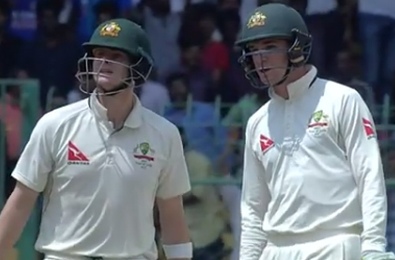 Editor-in-Chief of indiacommentary.com. Current Affairs analyst and political commentator. Writes for a number of publications. View all posts by this Author
When the Australian cricket team sledges, it is part of the game and anyone who takes umbrage is accused of being a crybaby. Arent adults capable of absorbing a few funny or pointed words without getting rattled? Isnt it a test of temperament not to get disturbed by constant on-field chatter by players of the opposing team? These are the questions asked when the Australians are asked to shut up. But when the Indian players indulge in some sledging of their own, someone like Ian Healy loses respect for Indian captain Virat Kohli. How conceited can one be! Incidentally, Healy did not "lose' any respect for Steve Smith for seeking advice from the dressing room in a DRS moment, a thing that bordered on cheating. At least he has not said so till now.

Ian Healy was part of several Australian teams who were very aggressive and sledged opponents with fine tuned words and gestures. They played the game hard with the focus on winning at all costs, even if it meant by rubbing it in the wrong way. Other teams, either out of no confidence in their own abilities or difficulties with language, tried to either ignore their excesses or sportingly endure them. For some time, the West Indians gave them back as good as they got. Now, this Indian team believes in its capabilities and has a captain who is aggressive. So it is not going to take Australian barbs lying down. Healy is disturbed that the usual Australian tactic is not working this time. Hence, he is angry with Kohli.

But after the 2nd Test, it is clear that the Australians are crossing several lines. To look at the dressing room for advice on DRS is nothing short of cheating. Steve Smith did that not once but thrice as Kohli rightly pointed out in the press conference. From sledging to cheating is just a step forward for a team bent on winning at all costs. But the Australians need to remember that there are cameras everywhere now and even the smallest of gestures are captured on video. They cannot get away with such sleights. When Peter Handscomb takes the blame on himself by saying that it was he who advised Steve Smith to look at the box for DRS, it reflects very poorly on Smith. Handscomb might have been unaware of the rule that prohibits seeking advice from the dressing room but Smith as captain must have been aware of it. Why then did he listen to Handscomb? Steve Smith said he had a brain fade. At this rate, the Australians will have too many brain fades in the remaining two Test matches.

The fact of the matter is that now that the shoe is on the other leg, the Australians are behaving like crybabies.