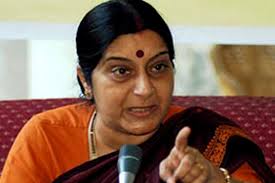 Sushma Swaraj: All Smoke and no Fire

Sushma Swaraj: All Smoke and no Fire

Editor-in-Chief of indiacommentary.com. Current Affairs analyst and political commentator. Writes for a number of publications. View all posts by this Author
Everyone (that is everyone with a slant towards the BJP) is greatly impressed by Sushma SwarajÃ¢â¬â ¢s spirited (and it was just that, all smoke and no fire) defence of impropriety charges against her in Parliament. Lal Krishna Advani actually patted Swaraj after she finished the speech. Was that gesture the BJP old guardÃ¢â¬â ¢s way of warning Modi to keep his hands off Swaraj? But was it actually a defence? To me, it seemed more like a tirade which asked: if you could do it, why canÃ¢â¬â ¢t I? Swaraj forgot that two wrongs do not make a right. If Rajiv Gandhi was guilty of letting Warren Anderson run away and of taking kickbacks in the Bofors case through Quattrocchi, he was punished by the electorate for that. But how does that lessen or put a seal of propriety on what Swaraj did?

Or are we descending into an era when corruption will also take place on precedents set earlier. By that token, if Rs 100000 cr were lost by the exchequer in the 2G scam, should the NDA now make the nation lose Rs 200000 cr in a 4G scam? This is absurd, really. Is Sushma trying to say that what she did was right because leaders of the Congress had indulged in greater impropriety? Is she employing the mathematical formula that two minuses make a plus in politics?

All the talk about Lalit ModiÃ¢â¬â ¢s wife being sick or Rajiv Gandhi having done so and so or the advice to Rahul to study his family history is no defence at all. I, for one, am extremely disappointed how this issue has panned out, especially in the times of a Prime Minister who promises to give the nation a corruption-free government and whose massive victory was facilitated by voters disenchanted with the scam tainted UPA government.