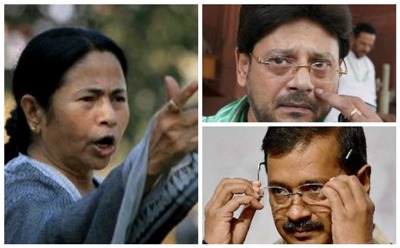 Tapas Paul Arrest: Why This Drama?

Tapas Paul Arrest: Why This Drama?

Editor-in-Chief of indiacommentary.com. Current Affairs analyst and political commentator. Writes for a number of publications. View all posts by this Author
Every time the investigative agencies or the police lay their hands on some politician or bureaucrat, they invariably hit back with what is now becoming the stock allegation  the government is indulging in vendetta. It has been the same with the Aam Aadmi Party, whose MPs and MLAs must have made a record of sorts by being, percentage wise, the most raided or arrested legislators. Arvind Kejriwal never tires of saying that Narendra Modi is using the power of the state to crush the partys voice by targeting his leaders. Now Mamata Banerjee has joined the list by terming the arrest of her party MP Tapas Paul political vendetta. What do these leaders want? That the state should ignore charges of wrongdoing against legislators only because they are politicians? Do they want two set of laws  one for the common man and another for politicians?

Tapas Paul has been accused of taking favours from the scandal-tainted Rose Valley group that had swindled a huge amount of money from the people across several states. Paul had served on the board of the chit fund and was being investigated for his role. He was arrested when he was unable to explain how payments made to him were written at reduced figures in the books. Common people are arrested for lesser things. Politicians are given a huge leeway in any case. Agencies are already under pressure as they have to always protect their backs against raiding big names. If the opposition piles further pressure by alleging vendetta, no politician will be touched in future. Even a few years earlier, it was let the law take its course. The change in the attitude of opposition parties shows that either they have lost faith in the course of law or they want a carte blanche for their leaders. Why cant Mamata let the law take its own course in case of Tapas Paul? If he is innocent, the agencies and the central government will have egg on their faces.

The behavior of these politicians every time one of their party leaders is arrested has emboldened others too. The manner in which former chief secretary of Tamil Nadu, P Rama Mohana Rao, chose to rubbish the Centre for raiding a serving chief secretary was most distressing, to say the least. What did Rao want the Centre to do after it found many charges of corruption and nepotism against Rao and his family members? Ignore them, just because Rao was on the chair he was? Rao could muster the courage to say things against the central government only because he, like misguided political leaders, feels there are two set of rules and politicians and bureaucrats enjoy a special immunity. He took his cue from politicians.

If corruption is to be eradicated, the law must be allowed to take its course. If a political leader or a highly placed bureaucrat is to be arrested, he or she must be. The opposition leaders should refrain from indulging in high voltage dramatics or terming it as political vendetta. The Sharada and Rose Valley chit fund scams have wiped out huge sums of money from the savings of the poor in Bengal, Orissa and Assam, among other states. As a peoples leader, the least Mamata can do is to ensure that the guilty are punished, even if they are from her own party. Similarly, Kejriwal should acknowledge that in his hurry to catapult himself in politics, he has admitted riff-raff in his party who are bringing it a bad name and shame. He should rid the party of such people instead of crying wolf. By taking off on a tangent, these leaders are trying to protect the guilty and attract a certain amount of guilt through association.