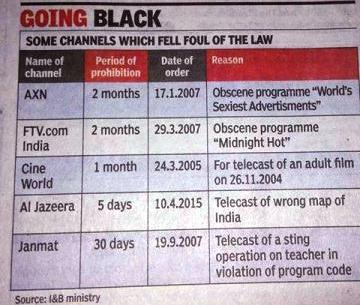 Holding an extreme view and carting the ball out of the park is what interests him most. He is a hard hitter at all times. Fasten your seatbelts and read. View all posts by this Author
The protest against banning of two television channels  NDTV India and News Time Assam  has gained momentum with several bodies and some politicians (including Arvind Kejriwal) calling for all the channels to suspend broadcast from midnight of November 8 to midnight of November 9 to show solidarity with the banned channels. This means that all those calling for such a response think that laws are just made to be published in the official gazette and legal tomes. They are not to be followed by the citizens and enforced by the government, especially if such laws are enacted to regulate the media. This is a very absurd stand. The government has not done anything arbitrarily or in a partisan manner. Rule 6(1)(p) exists in the statute books. If a channel violates it, should the government look the other way? Then what was the use of inserting the rule? The media in India is reasonable most of the times, except when it thinks that efforts are being made to muzzle it. Then, it loses all sense of propriety and supports those among it who break the law of the country. Then, instead of being only the fourth pillar of democracy, it starts to think of itself as the only pillar.

NDTV India is guilty of violating the rule by pinpointing the location of the ammunition depot at the Pathankot air base and also broadcasting that some of the terrorists were just 100 metres away from the depot. Now NDTV India has a huge footprint worldwide. The handlers of the terrorists were probably scanning Indian news channels. The terrorists had mobile phones. Put two plus two together and you dont need to be in the Army or be a trained security person to imagine what mischief that information could have done. If the bosses at NDTV say that they were not aware of the rule, firstly they need to be informed that ignorance of law is no excuse to escape punishment and secondly, if they are not aware of the legal bindings of their profession, they have no business to run a news channel. Their stated excuse that the print media and other channels were also publishing or broadcasting the same story is not as much an excuse as a damning admission of guilt. NDTV India admits that it broadcast what the government is punishing it for. It only disputes the punishment. But if the rule exists and if punishment is prescribed for violating it, NDTV Indias admission of violating the rule itself makes it liable for punishment.

If we take the News Time case, we have to go back in the past to see that many other channels were hauled up for similar or even lesser violations of the Programme Code and handed out stricter punishments. The picture accompanying this article shows that AXN was taken off the air for 2 months in January 2005 for screening a programme deemed obscene. FTV was handed a similar punishment in March 2005 for another obscene programme. Why didnt the protestors come out of the woodwork then? Of course it was the Left-supported and socialist UPA ruling at the Centre then and it was being advised by the same set of people who are in the forefront of the protests now. One is sure that if the same was to happen now, the Left intelligentsia would cry that the Centre is being prude and is following the RSS agenda. Why have one set of ethical standard for the bans under UPA and another set for NDA? Similarly, why have different ethical standards for entertainment channels and news channels? If the Programme Code is violated, be it by an entertainment channel or by a news channel, the punishment prescribed must be applied. Otherwise, burn the Cable Television Networks (Regulation) Act, 1995 and the Programme Code and give a free run to the media.

The media had allowed the UPA government to enact the above act. The print publications knew it was discriminatory and did not provide for a level playing field. Yet the media bodies, where print publications rule the roost, did not challenge it in the courts. Hence, there are different set of rules for the channels and they can be hauled up for broadcasting the same story that a print publication can get away with. If Venkaiah Naidu says that the current protests are politically motivated, he is partially correct as the law of the land has been broken and until there is an independent regulatory authority, it is the government that is going to decide who broke the rules and how it will punish it as per law. That is the job of the government and its agencies. The government is just doing its job. NDTV has appealed against the ban in the Supreme Court. In a democratic country, that is the best way to find out whether the government is acting arbitrarily or whether it has based its order on sound legal principles. Till the time the apex court decides on the matter, those supporting the channels that broke the law should refrain from creating an unholy racket.