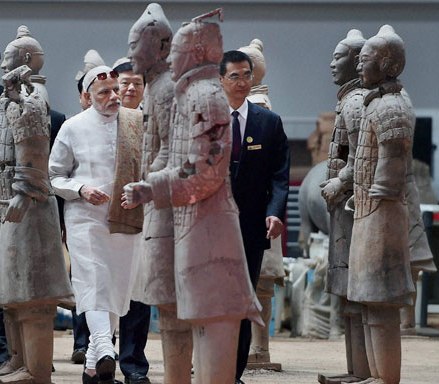 The Chinese Give Nothing Away

The Chinese Give Nothing Away

Editor-in-Chief of indiacommentary.com. Current Affairs analyst and political commentator. Writes for a number of publications. View all posts by this Author
As the Prime Minister completes his tour of China, though he can cite many positives from the visit, the fact remains that Indo-Chinese relations are too complex and the distrust too deep rooted to be solved in one short visit.

Narendra Modi has been an admirer of the way the China has become the manufacturing hub of the world ever since his days as Gujarat chief minister. In fact, he had even visited China during as the state CM. Hence, the Chinese respect him. But they are unlikely to yield positions.

Though Modi showed immense trust by declaring e-visas for Chinese visitors, he also spoke his mind by asking the Chinese to be flexible on the border issue. His hosts, though, remained inscrutable as always on issues that matter.

Though he signed many government to government agreements and MOUÃ¢â¬â ¢s worth $22bn were inked with Chinese entrepreneurs, Modi has been behind in providing the infrastructure and business climate needed to attract serious business proposal.

For Ã¢â¬ËMake in IndiaÃ¢â¬â ¢ to be a serious mantra, the Modi government will have to ensure that a solution is found fast to the Land Bill, serious measures are taken to ease doing business, infrastructure is developed on a war footing, rampant corruption is checked, rings of vested interests that prevent government policy from fructifying are smashed and tax issues are not raked up or escalated.

As of now, if the Chinese have shown some interest it is only because India has the potential of offering a low cost base for outsourcing some of their vast manufacturing portfolio due to its lower labour and land costs. But when they find that delays and unforeseen expenses related to corruption are eating into their supposed profits, they will go away.

Hence, Make in India should start with a boost to Indian industry. If local units are successful, foreigners will come in hordes. The government should first look into the problems of local manufacturers. The Q4 results across sectors are middling to bad. The stock markets are going down. The IIP is stagnant. Banks do not find borrowers as no promoter is willing to invest in a climate of uncertainty. There are hundreds of large projects stuck, and as found, it is not only due to land problems. If our homegrown industry is not on a roll, how can we expect foreigners to pour in the dollars?