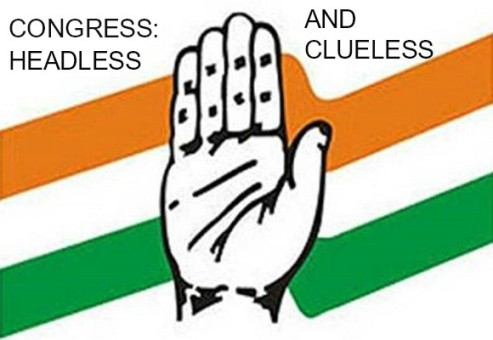 The Congress Party: Headless And Clueless

The Congress Party: Headless And Clueless

The Congress party is being torn apart as it is headless. Ever since Rahul Gandhi submitted his resignation and refused to take it back after countless entreaties from all senior leaders including his mother and sister, the party has not been able to decide how it should tackle this unprecedented situation.

Given to being lackeys in front of the Gandhis, no Congress leader has any plan or the guts to put up his name as a replacement for Rahul. They look forward to the Gandhis to keep them together and lead the party, knowing full well that none of the other leaders will be acceptable to other leaders and the workers.

But this indecision has kept the party headless for nearly 20 days now and in the interim, most state leaders are revolting. 10 legislators from the party have switched sides to go to TRS. There are reports of revolts in Rajasthan and Madhya Pradesh. There seems to be no one who can talk to these disgruntled elements and keep the flock together.

Reports say that the Congress is thinking of appointing an interim president. That would only be a stop-gap measure and is likely to exacerbate the problem. The person so appointed will have neither the standing nor the power to control state leaders. They have to either find a long term replacement for Rahul or run the party through a presidium of four or five leaders.

The Congress says that it got more than 12 crore votes and that it means people still have faith in the party. But if the party displays complete servility towards the Gandhis and remains in the doldrums for long, the 12 crore will dwindle to 6 and then to 2. People like their leaders to be strong and decisive. The Congress, at present, resembles a rag-tag outfit unsure of its future.