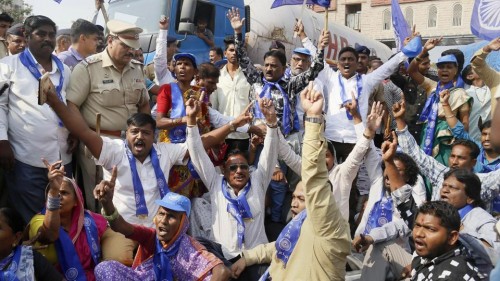 The Dalit Protests Were Politically Motivated

The Dalit Protests Were Politically Motivated

Editor-in-Chief of indiacommentary.com. Current Affairs analyst and political commentator. Writes for a number of publications. View all posts by this Author
It has become a regular racket for assorted groups to take to the streets for protesting against anything that catches their fancy. In recent times, it started with the Padmaavat agitation, continued with the Jat and Patel agitations and has now resurfaced with the Dalit agitation. No one grudges these groups their right to protest if it is done is orderly and democratic manner, like the farmers' agitation was done in Maharashtra. But these agitations more often than not inconvenience a lot more people for many days than the number of people likely to be aggrieved by the subject of the protest. Further, most of these agitations are not popular uprisings but politically motivated instigations, done through spreading of misinformation and outright lies.

Take the current dalit agitation. The dalit groups called a Bharat bandh despite the Centres assurance that it would file a review petition with the Supreme Court. Since a court order was involved in a matter of law, this was the correct process. In fact, the Centre filed a comprehensive review petition on the day of the bandh. But Mayawati has said that the delay on part of the Centre in listening to the dalits made them come out on the streets. How is delay calculated in court matters? The Supreme Court Rules, 1966 prescribe that a review petition has to be filed within 30 days of the order. Hence, delay is if 30 days elapse. The dalit groups would have been justified in taking to the streets if 30 days had elapsed, or if the Centre had not assured that it would file a review petition or if they had strong reasons to believe that despite the assurance, the Centre would not file the petition. Most likely, their leaders spread the last as misinformation to instigate them.

Mayawati also chose to ignore that her party leader and ex-legislator from Hastinapur in Meerut, Yogesh Verma, has been identified by the police as the main culprit in instigating the riots. Obviously, smarting under the way it was outmaneuvered in the RS polls, Mayawati wanted to hit back at the government. The Supreme Court ruling on the SC/ST Act came handy. Misinformation, in the form of statements like the Centre is anti-Dalit and will not file the review petition must have been used to bring Dalit youth on the streets. Once the miscreants are let loose, no one has control over them and violence usually follows. A death or two doesnt matter to these misguided leaders. In fact, it makes the protest even more political and aggressive.

What exactly is there to protest in the Supreme Court order on the SC/ST Act? Is a law equitable if it treats an accused guilty from the complaint stage itself? Should X be arrested just because Y complains against him or should there be proper enquiry into the facts before the arrest, like in most other laws? It is a basic principle of law that an accused is to be treated as innocent until found guilty by a court of law based on evidence. But the SC/ST Act treats the accused as guilty and liable to arrest as soon as someone lodges a complaint against him. This has made the Act an instrument of misuse. Apart from this clear inequity in the law, the court cited figures to show that only a quarter of the complaints resulted in convictions, proving that too many false cases were being filed under the Act. The court has just provided that proper enquiry must be made before arresting the accused. Is it dilution?

No one can deny that atrocities against the Dalits and backward classes are regularly committed in the hinterland of north India. Not only the upper castes, but affluent Dalits and even the police make them suffer in untold ways that can make even a strong city dweller faint. But that does not mean that we should have a draconian law that is also inequitable. Due process of law must be followed in all cases and proper enquiry must be made on the complaint before the arrest. The dalits must be made to understand this. The Centre has made a grave mistake by filing the review petition. As for Mayawati, the blood of 9 innocent persons killed in the protests is indirectly on her hands.