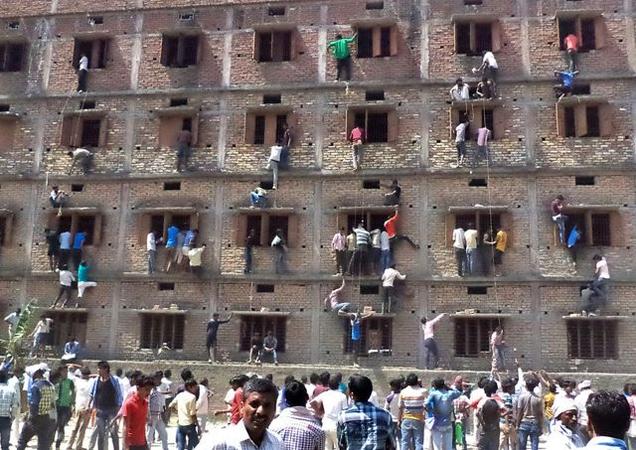 The Stink In Bihar's Education System

The Stink In Bihar's Education System

Editor-in-Chief of indiacommentary.com. Current Affairs analyst and political commentator. Writes for a number of publications. View all posts by this Author
Last year, when images and videos of people climbing up school walls to help examinees with notes and cheat-sheets sullied the image of Bihar worldwide, the then state education minister, Prashant Kumar Shahi, asked in exasperation that should all of them be shot. Lalu Prasad Yadav, who was not in government then and was a sworn enemy of chief minister Nitish Kumar, had condemned the act which he said made educational degrees from Bihar not worth anything in the rest of the country. The government had invested in CCTVâs and put in place a system of fining students caught cheating. Hence, when the results were declared for this yearsâ examinations last week, the pass percentage was less than 50. Despite large scale cheating and copying, one out of every two candidates failed to get the minimum required to clear the examinations.

Worse, the topper in Arts stream, Ruby Rai, said that political science was a subject that taught cooking and the Science topper, Saurabh Shresth, could make no connection between water and H2O. What and how are they teaching in Bihar? State education minister Ashok Choudhary has admitted that evidence points to either proxies having taken the exam or replacement of answer sheets. An embarrassed government has ordered a fresh exam for the toppers. A probe has been ordered too.

The minister has acknowledged the existence of an âeducation mafiaâ in the state that works to hand out degrees on a platter. From admissions to âassisted exam-takingâ (what a wonderful euphemism for cheating and copying), this mafia ensures that students who can pay for their services get what they want without lifting a book.

When there were comparisons between Gujarat and Bihar in the run up to the 2014 Lok Sabha elections, Leftist thinkers took immense pains to point out that the social indicators (mainly government investment in education and health sectors) in Bihar were much better than those in Gujarat in order to run down the so-called Gujarat model. But investment just for the sake of it or without any proper feedback is throwing money down the drain, as these developments show. Bihar is one of the most backward states where education is concerned, despite having good indicators.

The reasons for this are not hidden. No state can be said to have such a huge body of students who cannot get the minimum required to pass an examination. Compared to other states, the pass percentage in Bihar is astoundingly low. This has more to do with the worsening of education system and abominable quality of teaching in the state than anything else. There is this joke about teaching in Bihar which succinctly sums up the picture. A geography teacher was teaching the class that the river Ganga originates from Gangotri and falls into the Bay of Bengal. When he repeated this thrice, a small hand went up and asked, âSir, but it goes through many places like Allahabad, Varanasi and Kolkata before it reaches Bay of Bengal.â The miffed teacher told him âSit down, in the money I get to teach you, it will start at Gangotri and fall in Bay of Bengal.â

The teachers have also come out of the same system. If todayâs toppers cannot answer elementary questions related to their subjects of study, the teachers who taught them are to blame. Lack of knowledge on the part of teachers, coupled with lack of desire to teach in the classroom in order to lure students for private tuitions and rampant absenteeism are the bane of the education system in Bihar. A sting operation on teachers last year had exposed their complete lack of knowledge in subjects they were teaching in middle and senior schools.

The Bihar government should realize that subjecting toppers to a retest can at best be a fact finding method. The real malaise lies elsewhere. It has to conduct an audit of schools, of inspectors overseeing those schools, the systems in place, the methodology of teaching and the teachers themselves â in short, the whole system of education in the state. If this is not done by a qualified and impartial agency â the state babudom should have no say in this otherwise the findings will be dubious â and measures suggested are not implemented, education in Bihar will keep getting worse. The time for knee-jerk reactions and stop-gap measures is over. Does it matter whether Akbar is given prominence in history books or Rana Pratap if at the end of the day students do not know both?

Simultaneously, the government should crack down on the education mafia and the coaching hubs. It should also clamp down on the practice of private tuitions by teachers. The education mafia has ensured that education has become a flourishing business in the state and has given birth to a new class of crony capitalists. These middlemen have corrupted both the education administrators and the student class. The coaching hubs are generally the front through which the mafia operates. No teaching is done at these hubs, only the price is negotiated for either leaking papers or ensuring degrees. Finally, if teachers are more interested in the huge side income that private tuitions offer, they start teaching lesser in classrooms to force pupils to approach them for the same. This is a vicious circle that has entrapped generations of students in Bihar and the time has come to employ some jaw breaking methods to crush it.

Nitish Kumar cannot gloat over social indicators when the money spent on education produces such results. Everything stinks in Biharâs schools and colleges. The government should first come out with a white paper on the state of education in the state. Then, it should appoint an agency to carry out a comprehensive audit. Based on the audit report, the government should constitute a committee to suggest ways to overhaul the corrupt system. Once the committee gives its report, the measures should be debated and implemented. All of this has to be achieved within a given timeframe that should be strictly followed. If two plus two is not made to total four again in Bihar, one cannot see any future for the millions of examinees taking the tests of Bihar board.