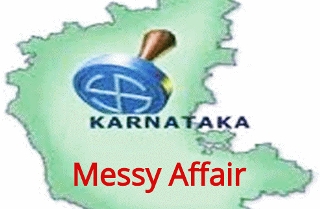 The Unsavoury Mess In Karnataka

The Unsavoury Mess In Karnataka

Editor-in-Chief of indiacommentary.com. Current Affairs analyst and political commentator. Writes for a number of publications. View all posts by this Author
The Supreme Court has done the right thing by not giving time to BS Yeddyurappa and the BJP to cobble numbers through horse-trading. It has also done the right thing in not reversing the governors decision of inviting the BJP. It is true that the constitution allows the governor to use his discretion in case of fractured mandate, but it is also true that this discretion is to be used wisely and with a clear conscience. The Supreme Court did well to raise questions about the way in which this discretion is applied by governors. It is obvious that Vajubhai Vala has never read the classic Munshi Premchand story Panch Parmeshwar, or the judge is supreme.

In the first past the post electoral system that India follows, it is true that the BJP fell short of majority. But it is also true that the people voted against the Congress which is evident as it lost 44 seats from the tally in 2103. That it was a vote for the BJP is also clear as the party gained 64 seats. Although the vote share of BJP was lesser than the Congress but that holds little meaning in first past the post system. It is also true that since the Congress and the JD(S) fought the elections against each other, the people of Karnataka did not give them a mandate to come together and form the government. But a vacuum cannot exist in democracy and it is the duty of every party to try a form a stable government. Hence, although the coming together of Congress and JD(S) can be termed opportunistic and even immoral, it is definitely less immoral than trying to form a government by snaring opposition MLAs through unfair means like monetary or other inducements.

In any case, the matter will be decided on the floor of the house today. The BJP, not having had the luxury of time on its side, is now said to be banking on the support of a score of Lingayat MLAs in both the Congress and the JD(S). The other parties know this and will definitely try and prevent them from voting in favour of BSY by dangling carrots of their own. One is still of the opinion that instead of creating such a mess, the BJP should have let the Congress and the JD(S) form the government. The opportunistic alliance would have broken down sooner rather than later. It would have been then appropriate for the BJP to have stepped in.