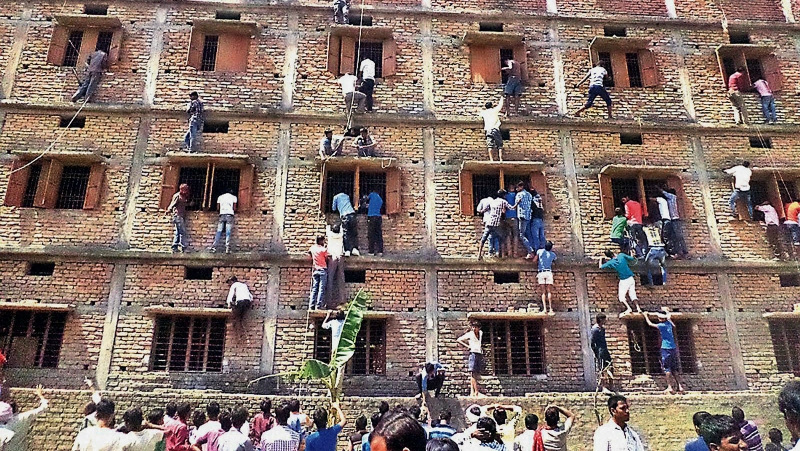 The Wall Says it All, or Does it?

The Wall Says it All, or Does it?

Editor-in-Chief of indiacommentary.com. Current Affairs analyst and political commentator. Writes for a number of publications. View all posts by this Author
Is the Indian education system testing memory rather than knowledge and skill? Is our complete dependence on theoretical learning supplemented by subjective type examinations in schools up to the higher secondary stage making our children unsuited to the challenges in the real world? More importantly, is this state of affairs leading to the kind of cheating mania that was witnessed recently in Bihar?

Veteran writer Chidanand Rajghatta, writing in The Times of India, has showed how the images of the Bihar cheating have been front paged in countries as far away as Canada. Rajghatta argues that the system of learning by rote for examinations is the culprit. He rightly says that it is a sad day that it had to happen in Bihar because the state was so far ahead in education in medieval period with universities such as Nalanda, Vikramshila, Somanpura, Odantapura and Jagaddala that attracted scholars from far and wide. He compares how Indian students earn laurels abroad through all round academic and extracurricular excellence, drawing unrestrained applause from even the US President Barack Obama, while they continue to waddle in mediocrity back home, resorting to cheating just to be job ready. He rues the lack of Ã¢â¬Åphysical work and practical hand skills that supplement mental calisthenics.Ã¢â¬Â

These questions were raised in the hugely popular Hindi film Ã¢â¬Å3 IdiotsÃ¢â¬Â where the main protagonist continuously made fun of his friendsÃ¢â¬â ¢ efforts to ace examinations through learning by rote while he himself went around putting his knowledge to practical solutions, like delivering a baby through suction by a vaccum cleaner with reduced speed, or generating electricity with a home grown inverter, for instance. The film had highlighted the same anxieties about the Indian education system that Rajghatta now explores in the wake of the negative publicity the Bihar cheating scam has generated for an India that is otherwise thought to possess highly technical minds that design complex software and provide sound solutions to problems as diverse as rocket propellers at NASA or the Mars Orbiter System back home.

In a country where a government job is the most coveted prize any lower middle class student can dream of, learning by rote will remain the modus operandi to get that degree or diploma that will bring one closer to that job. In a country where thinking out of the hat is still frowned upon by most teachers in government schools, students will keep on reproducing what they memorize from poorly researched and more poorly put together academic texts. Even the teachers have become blasÃÂ© Ã¢â¬" they teach the minimum required, making no effort to take the wards on an academic journey of excellence. A joke will illustrate this: A teacher kept repeating in class that the Ganga originated from Gangotri and made its way to the Bay of Bengal. A bright student raised his hand and complained that in between, the Ganga encountered many important landmarks and was marked by tributaries and distributaries. Exasperated, the teacher asked him to sit down and said that in the salary he was being paid, Ganga will just originate at Gangotri and end at Bay of Bengal.

Although just a joke, the incident highlights another problem in the Indian education system till the high secondary level Ã¢â¬" teachers who do not teach the way they are supposed to. Since they are themselves the products of the same system of rote learning, they find nothing wrong in preparing children under them in the same way. They adhere to the text books as if their lives depended on it. They never digress or make an attempt to make classes interesting by narrating stories about the topic. Of course, it is not solely the fault of the teacher. Those who are knowledgeable enough to inform students about interesting tidbits on the topic are immediately hauled up by the authorities backed by parent complaints. Ã¢â¬ÅThe teacher teaches what is not in the book, confusing our childrenÃ¢â¬Â is the most common complaint from the parents. With this, parents get what they deserve Ã¢â¬" reduced learning in classrooms. They have to fall back on arranging Ã¢â¬Ëtuition classesÃ¢â¬â ¢ for their wards after school hours, providing sustenance to the now entrenched alternative education industry in India and adding to the pressure and anxiety in children as small as 7/8 years.

It is the complete failure of this system of education that PM Narendra Modi has to undertake a skill development mission. ShouldnÃ¢â¬â ¢t skill development be a part of any decent school curriculum? But this is asking too much of a system that reduces art or drawing classes to a farce and makes drills appear an outing in the park. The annual sports day of government schools should be seen for the element of comedy they provide. Unfit students, who are never taken to a field (an overwhelming majority of the government schools do not have a sports teacher, and even when there is one, his qualifications would be suspect) even for a day in the whole year, are made to go through the paces. It is more of a picnic for the teachers, with parents pitching in by bringing home made food. The projects students are asked to make at home are more often done by the parents. Some are even outsourced from the friendly neighbourhood carpenter. Ã¢â¬ÅDonÃ¢â¬â ¢t waste your time doing this, learn the fifth chapter from the history bookÃ¢â¬Â parents will tell children wanting to make the model herself/himself.

A revolution is needed if India is to unleash the potential of its wide-eyed children. School work, coupled with time spent in front of television, video game screens and computer/laptops and later on the mobile phone, means that children have forgotten about the great outdoors. The children have to be first drawn out of their comfort zones and brought to the parks and fields (not that many exist in our towns and cities). They have to be encouraged to ask questions and parents have to take pains to take them to technological museums, such as the Birla Industrial and Technological Museum or the Science City in Kolkata, to show how things work instead of just Ã¢â¬ËgooglingÃ¢â¬â ¢ and showing images. It is our combined failure as society that we have not thought of an alternative system that will skill our children and make them intelligent as opposed to the Ã¢â¬Årattu totasÃ¢â¬Â (loose translation: repetitive parrots) and job ready they become under the current system.