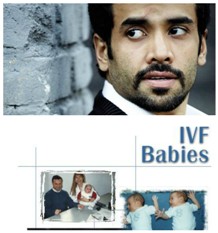 Editor-in-Chief of indiacommentary.com. Current Affairs analyst and political commentator. Writes for a number of publications. View all posts by this Author
The news that Tusshar Kapoor, son of yesteryears star Jitendra, had become a single dad through the Assisted Reproductive Technology (ART) method by using a surrogate mother for his child has generated extremely diverse reactions in society. While many people have welcomed the move by pointing out that changing social mores have instilled a desire of having and raising children in both males and females without getting married, others have opined that this will ring the death knell of marriage as an institution. Some doctor-experts have also pointed out that allowing ART parenthood to singles is a violation of Indian Council of Medical Research (ICMR) guidelines.

If we go strictly by the legal angle, ICMR guidelines provide that the IVF route to parenthood is to be provided only to married couples who are unable to have children. It has detailed guidelines for testing why the couple is unable to have children and has prescribed tests for both the male and the female partner. Doctors can prescribe treatment and the method only after tests are done to pinpoint the reason. In case of Tusshar, since he did not have a wife, it cannot be said that the couple was unable to have children. It was purely his personal choice to have a surrogate mother for his child. This naturally defeats the purpose for which IVF parenthood is allowed as of now.

This situation has arisen because there is no law to manage this. Despite the draft Assisted Reproductive Technology (Regulation)(ARTR) Bill, drafted by ICMR, being in public domain since 2010, successive governments have either not considered the matter to be of importance or have not found time to convert it into law. Hence, despite exhaustive guidelines, there remain grey areas which are exploited by unscrupulous medical practitioners.

As far as social mores are concerned, although it is not a custom in India to remain single or have a live-in relationship and a majority of people still feel that marriage is necessary, a large number of people are looking at alternatives out of choice. Society needs to respect their choice and accept this. Hence, allowing ART parenthood only to married couples is something that needs to be revisited.

It is good to provide ART to couples who cannot have children. But it is not bad to provide the same to singles who wish to have and raise children without getting married. Hence, the draft ARTR Bill needs to be revised and put up for discussion. After that, it should be made law as soon as possible to prevent misuse and procedural illegalities by patients, doctors and clinics.