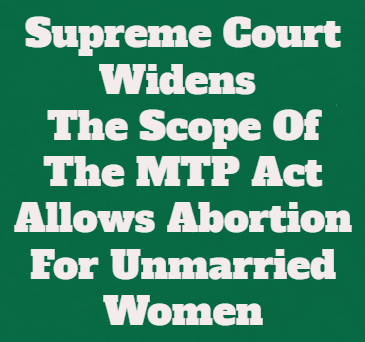 Unmarried Women Get The Right To Abortion

Unmarried Women Get The Right To Abortion

In a landmark decision, the Supreme Court expanded the scope of the abortion law to make it legal for unmarried and single women to terminate unwanted pregnancies. Saying that denying abortion rights to this category of women will mean denying them the rights guaranteed in Article 21 of the Constitution, the bench said that it will also go against the intent of the legislation.

In the instant case, the petitioner appealed to the court to allow her to terminate her pregnancy that was in an advanced stage as her partner had abandoned her. The court said that it would be contrary to the intent of the law if the petitioner was made to suffer an unwanted pregnancy and she should not be denied the same only because she was unmarried. The court allowed the woman to terminate her pregnancy if a medical board at AIIMS certified that it was safe to abort as she was in an advanced stage of pregnancy.

The court recognized that the MTP Act does not expressly allow this right to unmarried or single women. It said that "while Section 3 travels beyond conventional relationships based on marriage, Rule 3B of the MTP Rules does not envisage a situation involving unmarried women, but recognizes other categories of women such as divorcees, widows, minors, disabled and mentally ill women and survivors of sexual assault or rape. There is no basis to deny unmarried women the right to medically terminate the pregnancy when the same choice is available to other categories of women." It categorically said that "excluding unmarried women and single women from the ambit of the statute goes against the purpose of the legislation."

The court went on the explain that it was never the intent of Parliament to limit the application of the provisions of the Medical Termination of Pregnancy Act (MTP Act) to only married and certain other classes on women. That is why, the court said, the word 'husband' in Explanation 1 of Section 3(2) of the MTP Act was replaced with the word 'partner' in an amendment carried out in 2021. "Explanation 1 expressly contemplates a situation involving an unwanted pregnancy caused by the failure of any device or method used by a woman or her partner for the purpose of limiting the number of children or preventing pregnancy. The parliamentary intent is clearly not to confine the beneficial provisions of the MTP Act only to a situation involving a matrimonial relationship."

It is heartening to note that while the US Supreme Court had recently denied women the right to abortion, the Indian Supreme Court has widened the scope of the law to allow the right to unmarried and single women. A large number of such women faced an extremely traumatic period if they had an unwanted pregnancy. Many such women lost their lives or suffered from other complications as they explored options from tablets to quacks or unlicensed abortion centres as they were denied access to legal and safe abortion. This Supreme Court decision will allow them to terminate unwanted pregnancies legally, in time and safely.