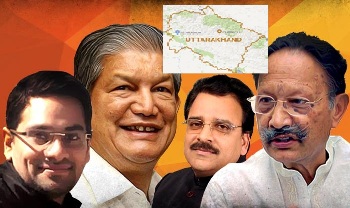 Editor-in-Chief of indiacommentary.com. Current Affairs analyst and political commentator. Writes for a number of publications. View all posts by this Author
For the BJP, Uttarakhand assembly elections were special. The party had lost face when the Supreme Court reinstated the Harish Rawat-led Congress government after the Centre had dismissed it on the advice of the state governor. The Union government had perhaps rushed into taking a faulty decision then. But the elections proved that the people were fed up with the shenanigans in the Congress. Governance was taking a back seat as Congress leaders were busier in holding on to their respective turfs and keeping their house in order. Finally, the Modi tsunami that hit them has left them with no turf. There will be more infighting in the Congress as a result and leaders going their own way to float regional parties cannot be ruled out. Some might even join the BJP.

Uttarakhand is devbhoomi, home to several important Hindu pilgrimage spots including Haridwar, Rishikesh, Kedarnath, Badrinath, Yamunotri and Gangotri. Since the BJP has taken up the mantle of being the Hindu party, it is obvious it wants to rule Uttarakhand. PM Modis tweet calling the state devbhoomi confirms this. Hence, along with UP, Amit Shahs focus was also on Uttarakhand, partly to erase the memories of a botched up Presidents rule which earned a rebuke by the Supreme Court and partly to control a state associated with Hindu pilgrimage. Hence, the scale of the victory must have pleased both Modi and Shah even as it stunned the others into silence. That outgoing chief minister Harish Rawat himself lost shows that even though the Supreme Court faulted the procedure of the Presidents rule, the people firmly believed that Rawat was involved in horse trading and worse, as the sting operation CD showed.

The state is another example of how the Congress high command allows its local leaders to fight among themselves and sink the party. The Rahul Gandhi formula is to interfere where interference is not required and do not when it is urgently required. This has made Congress lose state after state as its local leaders, foisted as they are from the top, are neither popular nor fit to rule. Further, they have always got to look over their shoulders to prevent a stab in the back from their own party leaders. This has reduced the Congress footprint and made it even worse than a regional party. After UP, people will even shy away from having it as an ally. It will take a huge effort on the part of the party to keep its flock together in Uttarakhand, as also to motivate its devastated workers.