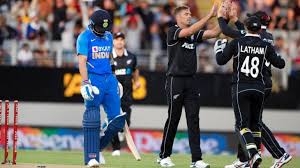 For the first time during his captaincy, Virat Kohli is making inane statements. When the Indian team lost three ODIs on the trot, Kohli opined that in the year when the T20 World Cup is going to be held, losing in ODIs is not a setback. "One-day cricket in this calendar year is not as relevant like T20Is and Tests" is what the skipper said. Then, when the team lost the first Test, Kohli said that despite people wanting to believe that it was "a massive loss" it was not and that the "toss turned out to be very important".

If ODIs and Tests are not important in this calendar year because of the impending T20 World Cup, as Kohli would have us believe, then why play them at all? Shouldn't the team then invest all its skill and energy in playing just T20's to prepare better for the tournament? Kohli should have given his brilliant idea to the BCCI and the ICC so that they could have prepared the playing calendar accordingly.

And where will that leave India in the ongoing World Test Championships? Does that also not count this year? Being fiercely competitive at all times, Kohli of all persons must be aware that winning or losing is a habit. A loss can be very demoralizing for the team while it gives the opponents the increasing confidence that this Indian team can be beaten regularly across formats. Regular losses, regardless of the format, bring the chips down and players sport long faces, especially the ones who are yet to establish themselves in the lineup. It also means that the management, already given to changing the lineup frequently, does so even more, upsetting the players.

This is not to say that this Indian team is invincible and will win all games. But the manner of losing the ODI series and the complete surrender in the first Test did not call for such 'brave' statements from the captain. Instead, the team should have introspected and changed its attitude. Fans take losses in their stride but they cannot swallow lack of application and absence of fighting spirit. The team needs to bounce back and perform to its potential in the remaining Test in the New Zealand tour.