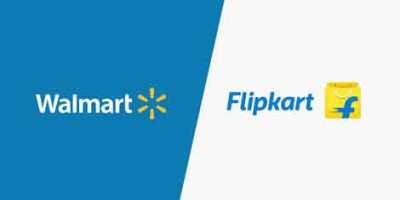 Editor-in-Chief of indiacommentary.com. Current Affairs analyst and political commentator. Writes for a number of publications. View all posts by this Author
With Walmart certain to buy out Flipkart from its promoters, how is the Indian B2C ecommerce space going to pan out in the near future? The importance of the deal can be gauged from the fact that the other big player in the field, Amazon India, made a last ditch attempt to ward off competition by making a bid of its own. If Amazon had been successful, it would have created a huge platform for sellers but it would also have denied them the benefits competition brings. Now, with two foreign players with very deep pockets fighting out in a nearly bottomless market (as internet penetration is low and buying habits are changing slowly, especially in the fast emerging grocery and daily essentials space), the sellers on the aggregating platforms will have a lot of leeway.

On the other hand, Walmarts entry might sound the death knell for smaller all-purpose aggregators. They will neither have the resources nor the infrastructure to match the might of these two giants. Customer acquisition and retention is a very costly affair in the ecommerce space. Hence, competing with Amazon and Walmart-acquired Flipkart will be impossible for smaller players. Only those who deal in niche products, like Urban Pro and Pepperfry in the furniture space for instance, can hold their own. Even Big Basket and Grofers will feel threatened as Amazon is investing hugely in its online grocery store Amazon Pantry and Walmart is sure to do the same in Flipkart, maybe by spinning off a sub-brand like Amazon. Although Paytm, backed by the Chinese behemoth Alibaba, can emerge as the third big player, as of now it is concentrating more on its wallet and payment bank services and aggregating merchants through Paytm Mall, as seen by the products on its platform and promotional activities, is low on its list of priorities.

As restrictions ease, regulations stabilize and cities and towns get clogged with traffic, ecommerce is likely to corner a large share of the market, at least for electronics, apparel and grocery. Couple this with rising sales of niche players in furniture, jewellery and grocery, along with the already huge share of the online travel players and the picture is complete. Further, new areas are also emerging and are instantly hitting it off with the consumers. Online pharmacies are fast changing the way people buy medicines, with Netmeds, 1mg and Pharmeasy being the early movers. As home-grown players capture market share for these niche products, one is sure foreign players will start eyeing them. Hence, another round of acquisitions might take place just a couple of years from now.