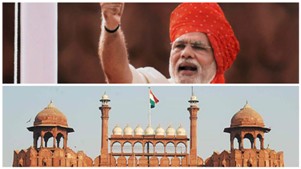 Editor-in-Chief of indiacommentary.com. Current Affairs analyst and political commentator. Writes for a number of publications. View all posts by this Author
In his mid-term speech from the Red Fort, the Prime Minister has to address several issues that, if not taken up strongly, will further derail his growth agenda and his tenure will be remembered more for what it could have been. The NDA government under Narendra Modi has been doing excellent work to rectify the complete breakdown of governance and policy making during the final years of UPA II. Decisions are being taken on important issues. These decisions are being taken transparently and big ticket corruption has almost vanished. Despite the opposition attack that Modi would favour big business, made famous by Rahul Gandhis suit-boot ki sarkaar jibe, this government has taken decisions to favour the country and not some industrialists. The government shed its rigid stance to bring the opposition on board for passing the hugely transformative Goods and Services Tax Bill. All this has created a platform that is crying out loudly for third and fourth generation reforms. When Narendra Modi tells the country of the achievements of his government tomorrow, he should also inform them of what he is now going to do to let these achievements become really transformative and how they will measure up to the aspirations of the youth, a group that voted for him in large numbers to give him a historic mandate on his assurance of putting inclusive growth above all else.

It is here that Modi is faltering. While his government is doing everything necessary to take India on a course of inclusive growth, the prime minister has not been able to do much about the baggage of subverters and disrupters who are off-shoots of the parent RSS to whom his political party is answerable. When he speaks against them, it is often when things have gone out of hand. He should not take note of what Praveen Togadia has said about cow vigilantes and tell the country tomorrow that he is against such regressive things. He should spell it out clearly that he is against people who are dictating what one should eat, how one should dress or how one should behave. India is a heterogeneous combination of people following different religions and speaking different languages. All of them have one dream  to better their station in life. When they work to achieve their dream, by extension they better the nations station. Of course, some of them use dubious, maybe anti-national, methods to achieve their ends. These people should be identified and punished. But to brand a whole community or a group of people anti-national is to belittle their contribution into making what India is today. Some people are bent on creating a divide of us versus them where the us is defined as the majority community but the them can be anyone who allegedly opposes the supremacy, beliefs and thoughts of a minority from this majority. The absurdity of the situation can be seen from the fact that these elements are now going after dalits. This is a dangerous trend which goes against the prime ministers dream of inclusive growth and which has the potential of taking the focus away from what his government is doing. Will the prime minister allow a handful of people to hold the country to ransom or will he tell the countrymen that his government will not allow this?

Another dangerous trend among the prime ministers so-called supporters is to try and silence a section of the press. A vibrant and free press is the backbone of any society. If someone has a difference of opinion and expresses it honestly, he or she is just doing his job. To throw wild allegations of paid news without proof is criminal. The same accusations can be hurled at that section of the media that is supporting the government. Vilifying, abusive and absolutely uncalled for names are being given to those who are opposing the government. This will only harden attitudes and a time will come when the good things of the government will also be reported wrongly. Hence, the prime minster should tell the nation tomorrow that strong action will be taken against those who are doing this.

Finally, the prime minister should reassure the countrymen that he stands by all that he promised during the campaign in 2014. He should clearly spell out how he is going to neutralize those sections of his extended party who are trying to divide the nation and are thereby creating hurdles in his path. If he does so, he will become the prime minister of the whole of India. Otherwise, there is the chance that he will be remembered as the prime minister who talked of inclusive growth but when the time came, remained a Hindu prime minister.