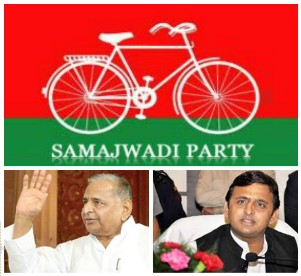 What's Brewing in the Samajwadi Party?

What's Brewing in the Samajwadi Party?

Editor-in-Chief of indiacommentary.com. Current Affairs analyst and political commentator. Writes for a number of publications. View all posts by this Author
Why Shivpal?
It is well known that Mulayam Singh Yadav has a soft corner for his younger brother Shivpal Yadav. It is equally well known that the Samajwadi Party (SP) supremo also loves his son Akhilesh. Hence, what is brewing in UP has come as a huge surprise to observers.

Attack and counter-attack
Mulayam removed Akhilesh from the post of state party chief and installed Shivpal in his place. Miffed by this, Akhilesh struck back immediately by stripping uncle Shivpal of all his important ministerial portfolios.Earlier, Akhilesh had removed some ministers and bureaucrats close to Shivpal Yadav.

Are swords being drawn?
Have the father and son duo drawn swords against each other? Further, is the close-knit family starting to break up? Shivpal Yadav has many followers within the SP and Mulayam fears a split if he is sidelined.

The other son
Mulayam has another son, Prateek, whose mother Sadhana Gupta Yadav is the second wife of the UP strongman. During the 2014 Lok Sabha elections, some party workers had asked him to let Prateek fight the elctions from Azamgarh. This was not acceptable to Akhilesh. To prevent matters from escalating, Mulayam decided to fight from two seats, including Azamgarh. But that was then. Is Prateek now staking his claim and is that the reason Mulayam is putting down Akhilesh?

Camps building up in SP
With the state already in assembly election mode, there will be several realignments. A lackluster tenure from Akhilesh has meant that SP has lost a lot of ground. There is discontent in the party regarding Akhileshs leadership. Recent events have shown that camps, both for and against Akhilesh, are building up fast.

Change of guard
SP workers see the reemergence of Mayawati and her party as a big threat to their backward class constituency. On the other hand, with the BJP working to consolidate the Hindu votes and wooing Dalits, some SP leaders fear a total washout. A change of guard is increasingly being preferred by many to fight anti-incumbency.

Too many questions
So is what is being seen on the surface as a family feud actually the beginning of a realignment of forces within the Samajwadi Party? Will it mean that Akhilesh will be sidelined in the run up to the polls? Will Mulayam take the reins in his hands? Or will we see the emergence of an unwilling Prateek as a counterfoil to Akhilesh?

Not all is well between father and son
The coming weeks will bring the answers to these questions. But one thing is clear  not all is good between Mulayam and Akhilesh and a willing Shivpal Yadav is being used by Mulayam to convey that.