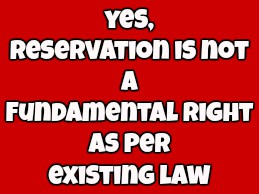 What's Wrong In The Supreme Court Order On Reservations In Promotions?

What's Wrong In The Supreme Court Order On Reservations In Promotions?

Once again, the Opposition parties, especially the Congress, have misread a Supreme Court judgment or are willfully spreading misinformation about it in order to slam the NDA government for being anti-quota. Readers will remember that during the campaign for the 2019 elections, Rahul Gandhi had misunderstood a Supreme Court judgment to claim that the court had said that there was corruption in the Rafale deal and the chowkidar was chor. He was hauled up for contempt of court by the apex court and had to apologize. This time too, he has been going around saying that the DNA of the BJP makes it oppose reservations. He said "this is the BJP's strategy to erase reservation. In the DNA of the BJP and RSS, reservation irritates them. They want to end it... I want to tell the SC/STs, OBCs and Dalits that we'll never let reservations come to an end no matter how much Modi-ji or Mohan Bhagwat dream of it."

First of all, there is nothing in the Supreme Court order that says that reservations should end. Secondly, affirmative action for the SC/ST and OBC is a matter of fact in India and no government can change the fundamentals of that policy. Yes, there will be added action for other classes, like the NDA government's policy to introduce quotas for the economically-weaker sections of the upper castes or for Jats and other categories. But the basic structure of reservation, however much it might be detested by those who believe in meritocracy, in India is not going to be changed by any government. Rahul Gandhi is guilty of spreading misinformation in this regard.

The Supreme Court has just said in its order that reservation for promotions in government service, or even reservation per se, is not a fundamental right. The constitution of India has affirmative action as an enabling provision under Article 16(4) of the constitution and not a mandatory one. This is absolutely true and correct reading of the law as it stands. The bench said that "there is no doubt the state government is not bound to make reservations. There is no fundamental right which inheres in an individual to claim reservation in promotions. No mandamus can be issued by the court directing state governments to provide reservations." If one were to read Article 16 fully, one will immediately know that (4) is an enabling section which provides an exception for the general principle of equality laid out in  (1) for otherwise all other citizens will claim to have been discriminated against if reservations were provided to the backward classes.

It is upon the government, whether state or Central, to arrive at a conclusion that a particular backward class of citizens is not "adequately represented in the service under the State" as per the data available with it and then provide for reservation for them to ensure adequate representation. It is the work of the executive to do this and the constitution has provided the enabling section. The constitution has neither made it mandatory for the State to do it nor has it put the onus on the courts to direct the executive to do so. Hence, the Supreme Court has given a perfect judgment on the law as it stands today. Those who are rubbishing the judgment and blaming the NDA government for not making proper representation before the court must remember that Article 16(4) has existed in the constitution from the beginning. If the Congress had wanted, it could have changed the law to make it mandatory for the government to provide reservations, in jobs as well as in promotions. It did not do anything like that in the over 60 years that it ruled the country. Neither did any other government. Blaming the Supreme Court or the NDA government now will not convince many.