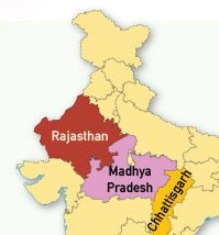 Which Way Will The Semi-Finals Go?

Which Way Will The Semi-Finals Go?

Editor-in-Chief of indiacommentary.com. Current Affairs analyst and political commentator. Writes for a number of publications. View all posts by this Author
The average of all published opinion polls for elections to three states  Rajasthan, Madhya Pradesh and Chhattisgarh  shows that the Congress is winning Rajasthan for sure while the BJP is winning Madhya Pradesh. It also shows that Congress might just pip the BJP in Chhattisgarh. These opinion polls say a lot of things about both the BJP and the Congress.

For starters, Congress winning Rajasthan is no big deal if one considers the states record of changing governments every five years. People in Rajasthan are known to vote out the incumbent in every election. Still, it takes effort  and leaders  to win elections. If the opposition field is empty, then the ruling party can come back on the basis of TINA  there is no alternative. In that sense, Sachin Pilot must be commended for the way he has marshaled his troops and channelized the peoples anger at the BJP government. His cause was helped as there is little or no infighting in the state unit.

The situation is just the opposite in Madhya Pradesh. Despite Shivraj Chouhan fighting anti-incumbency of 15 long years, infighting in the state Congress and its failure to forge alliances have meant that Chouhan will get one more term. The state Congress unit is in shambles with too many leaders pulling it apart. The BJP has taken advantage of the situation to strengthen its bases. Each Congress leader is more interested in protecting his home turf and ensuring that the other does not get more seats. This has sent out negative vibes and people feel that BJP is still the better alternative.

In Chhattisgarh, the situation is neck-to-neck, but the last minute defection of Ram Dayal Uike, senior Congress leader, to the BJP might just tilt the scale back in favour of the ruling party. Uike was the state working president of the party. The opinion polls had showed that the Congress was breathing down BJPs neck. But the equation has changed now. Uike is expected to pull his weight in at least 4 to 5 assembly seats and this will ensure a BJP victory.

With just Rajasthan to show for its efforts in what is being billed as the semi-finals before 2019 elections, Congress president Rahul Gandhi will have to reexamine his strategy. For, it is now clear that his charges against the government over the Rafale deal are not cutting much ice with the people, mainly in the rural areas. In fact, it seems that calling Modi chor has had an adverse effect on Congress chances. As Sharad Pawar said, people do not doubt Modis intentions. The Congress has to first set its house in order before taking the fight to the BJP. It must be more accommodative, as demanded by Akhilesh Yadav, in striking alliances with regional parties. It must stop infighting in its state units. If it cannot manage this then 2019 will again be a nightmare for it.