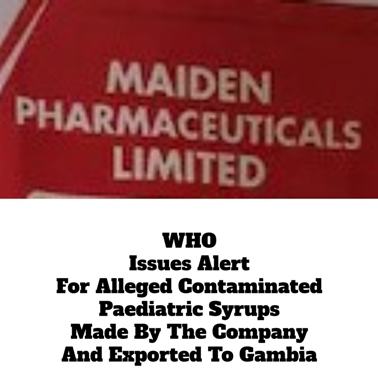 WHO Alert For Contaminated Syrups: India's Reputation As The Pharmacy Of The World Is At Stake

WHO Alert For Contaminated Syrups: India's Reputation As The Pharmacy Of The World Is At Stake

Gambia has recalled the four Indian cough syrups manufactured by Sonepat, Haryana-based Maiden Pharmaceuticals from pharmacies after the WHO alert that the syrups were, probably (pending detailed analysis), responsible for the death of 66 children in that country. The syrups were allegedly found to have a combination of several drugs some of which were found to exceed the permissible limits which probably led to the death of the children. WHO has recommended that the drug regulator in the originating country, meaning India, should conduct a thorough probe to find out the truth.

The Indian authorities have issued a preliminary statement that said that the charged company had been permitted to manufacture the syrups for export only and not for sale in India. It also added that as per available data, the syrups had been exported only to Gambia. But that is not the only brief that the drug regulator in India should be seized with. In its alert, WHO said that the syrups were "substandard (contaminated) paediatric medicines". India needs to conduct a thorough probe. It has been reported that the samples have been sent for testing and the report will be out in two days.

It is not for nothing that India is called the pharmacy of the world. Indian drug manufacturers are renowned and respected for manufacturing good generic medicines that are used all over the world. One bad fish can spoil the reputation and severely dent the goodwill generated through ethical practices followed by drug manufacturers for years. Hence, it is in the interest of India to probe Maiden Pharmaceuticals and inspect its manufacturing facilities to discover the truth. The said company should be handed the maximum punishment prescribed by law to deter others and protect India's hard-earned reputation if it is found guilty.