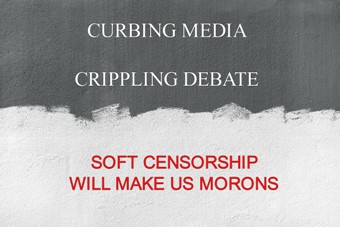 Why Go After Critical Voices In The Media?

Why Go After Critical Voices In The Media?

Editor-in-Chief of indiacommentary.com. Current Affairs analyst and political commentator. Writes for a number of publications. View all posts by this Author
The government must take note of the concern raised by the Editors Guild of India regarding the resignations of several senior journalists from a few channels and blackouts happening in signals of certain channels during the airing of programmes that are critical of the government. This comes after several journalists who have criticized the NDA government have been trolled in the most threatening and abusing language on social media and one senior journalist has even been stalked and threatened on the streets of Delhi. All this cannot be by coincidence and there is a pattern in these incidents.

The relationship between an elected government and the media has always been uneasy, to say the least. As there are a thousand points of view in politics, so also there are a million ways the media analyses government policies and decisions. The government cannot expect all analysis to be favourable. The same policy can seem to be chalk to one commentator and cheese to another. It is a matter of ideology and thinking. But democracy can thrive and bubble only when a million views are presented before the citizens and open debate is encouraged. If voices critical of the ruling dispensation are stifled, we will become a nation of morons. Even more than freedom of speech, it is the citizens right of freedom of gaining knowledge that is being trampled upon.

Every citizen has the right of be informed about how government policy will impact the nation and her or him personally. The government explains its policies by giving one side of the picture. It is natural for the government to say all good things about any policy decision for otherwise it would not have decided to implement it. But the citizen has a right to know if there is any downside to the policy. It is here where the role of media is indispensible. There are millions of experts in the country and around the world who will analyze the policy threadbare and will present both the good and the bad things about it. These experts write for the media or take part in debates that are aired to inform the people. Wishing for the media to write or air only the views that are favourable to the government or eulogize the leadership is the worst kind of megalomania and doesnt befit an elected government in a democratic country.