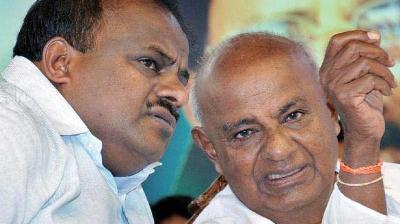 Why The JD(S) Chose Congress As Alliance Partner?

Why The JD(S) Chose Congress As Alliance Partner?

Editor-in-Chief of indiacommentary.com. Current Affairs analyst and political commentator. Writes for a number of publications. View all posts by this Author
Why did the JD(S) choose Congress as its alliance partner? JD(S) leader Danish Ali had recently said that the Congress uses its energies to destroy regional parties. Rahul Gandhi had also called JD(S) the B-Team of BJP. Were those red herrings to fool Amit Shah? Was Narendra Modi right when he said that the Congress and the JD(S) had a secret alliance? These questions arise after the alacrity with which the Congress proposed a disadvantageous alliance with the JD(S).

The first reason is not far to seek. The Congress, which prides itself in being the best at realpolitik, was smarting at the way it was outmaneuvered and outplayed in recent times by an aggressive BJP, especially in Goa and the north-eastern states like Manipur and Meghalaya. Hence, when it became apparent to the high command that a majority would elude them, communication was established with the JD(S). Unlike the recent past, the Congress had a plan B in place and it was activated in time to stump the BJP. The JD(S) had already sent signals that in case of a hung assembly, it was upon the Congress to seek support. When Congress approached it first with a lucrative offer, it jumped at it.

When the Congress capitulated totally and offered the CMs chair to Kumaraswamy, there was no way the JD(S) could have refused the offer. The JD(S) was adamant in not allowing Siddaramaiah as CM. This was one issue that aborted a pre-poll alliance between the two parties, apart from the overconfidence of the Congress. JD(S) also knew that if the Congress agreed to sideline Siddaramaiah, it would be in a bind as once Sidda was out; there were too many aspirants for the CMs chair in the party. It knew that to avoid rebellion, the Congress would offer the CMs post to Kumaraswamy. But it had thought that the post would be for two and half years, after which a Congress nominee would take over by rotation. Hence, when Congress offered the post unconditionally, the JD(S) accepted with glee.

On the other hand, Deve Gowda and Kumaraswamy knew the dangers of aligning with the BJP. They knew that the canny Amit Shah would always be on the prowl, backed by unlimited funds. The only way to keep the flock together was to accept the Congress offer and form the government, make some MLAs ministers and reward others with lucrative posts like chairmen of the various committees and boards. It also knew that with the BJP having 104 seats, it would be consigned to play second fiddle in an alliance with it. There was also no chance of Kumaraswamy getting the CMs post, not even for half the term. It also knew that once the BJP managed to snare MLAs from either the Congress or its party and had enough numbers, it could also break the alliance and leave the JD(S) high and dry. An alliance with the BJP was therefore a losing proposition.

Then there was the question of the pre-poll alliance with Mayawatis BSP. The JD(S), like all other regional parties, is getting around to the view that if regional parties unite, they have a huge chance to unseat the NDA in 2019. Hence, knowing Mayawatis extreme allergy to the BJP, there was little chance of the JD(S) going that way. In fact, it has been reported that although the Congress had opened lines of communication with the JD(S) two days before polling, it has also been reported that it was Mayawatis call to Sonia Gandhi that finally sealed the deal in the way Deve Gowda wanted it.

Finally, Kumaraswamy is also not very enamored of the BJP. His last experience of an alliance with the party resulted in an acrimonious breakdown. DeveGowda had once said that he will resign from Parliament if Modi became PM. Despite his recently displayed bonhomie with Modi, Deve Gowda is also not in favour of any alliance with the BJP. Otherwise, with BJP in power at the Centre, it would have been much more beneficial to forge an alliance with it. But both father and son knew that an upbeat and rampaging BJP would not have been a reliable partner. In any case, when the Congress offered kingship to those who dreamt of being kingmakers, there was no point in being junior partners in an alliance with the BJP.