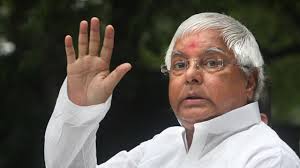 A Devilish Excuse By Laloo Yadav

A Devilish Excuse By Laloo Yadav

Editor-in-Chief of indiacommentary.com. Current Affairs analyst and political commentator. Writes for a number of publications. View all posts by this Author
The campaigning for the Bihar assembly elections, variously touted as the âwatershedâ or the âturning pointâ elections is turning out to be the most acrimonious one in recent memory. The way the barbs and the epitaphs are flying, one could be forgiven if one thinks that there are no real issues at hand to talk about. Leaders of all political parties have turned trivializing real issues into a fine art. In the process, they have also turned campaigning into a tamasha, where each one of them competes hard to see who can make a better public spectacle of himself.

At the very top of the list is, of course, the irrepressible Laloo Yadav. He is well known for his one-liners and repartee, along with the accompanying theatrics. His âHindus also eat beefâ remark was a case of speaking before thinking. His effort to make amends by saying that the devil made him talk like that was even worse. Laloo first tried to win Muslim votes by implying that beef eating was not bad or prohibited in India, but made a mistake by dragging Hindus into it. Then, after the uproar, he sought to put the blame on the devil.

Laloo needs to be reminded that there is no extraneous devil. The devil is inside him and he has nurtured it through the years by indulging in vote bank politics and displaying hatred towards certain classes. He has nurtured it by promoting his clan and turning politics into a family business. Fed on the continued misdemeanors of his host, the devil has bloated enough to now occupy the entire mind space and turn the host himself into a devil.

Chest thumping local satraps, who on their own cannot win an entire district let alone a state, have turned politics into a game of one-upmanship by following disruptive politics by employing lumpen elements. They make irreverent remarks about almost anything under the sun, never for a moment pausing to think of the havoc their remarks might create. Former justice Markandey Katju, although himself given to making irreverent comments (Netaji Bose was a âJapanese agentâ and Tagore was a âBritish stoogeâ) is not wrong in castigating politicians in very colourful language, including recommending that they be hanged. Problem is, many people think like Katju but do not have the courage to speak out.