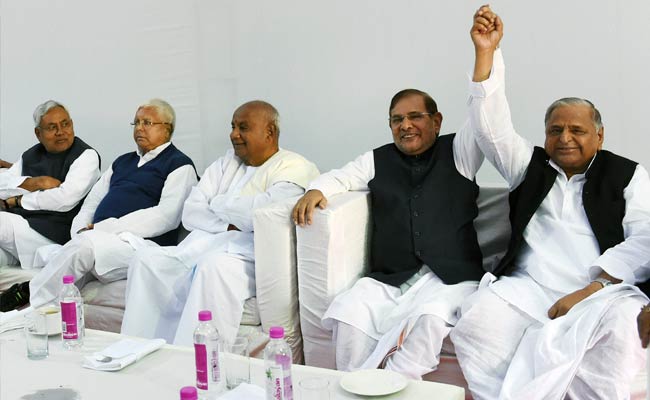 A Marriage of Convenience in Bihar: Will it Last?

A Marriage of Convenience in Bihar: Will it Last?

Editor-in-Chief of indiacommentary.com. Current Affairs analyst and political commentator. Writes for a number of publications. View all posts by this Author
Even as Lalu Prasad proposed that a united Janat Parivar fight the ensuing Bihar assembly elections under the leadership of Nitish Kumar, two things stood out. One, Lalu was the only one not smiling in the pictures published in the media post the announcement (see picture). Two, in subsequent interviews to the media, Lalu said that he is ready to Ã¢â¬Ådrink poison to crush the cobra of communalism.Ã¢â¬Â

Now, the lack of a smile clearly showed that he proposed NitishÃ¢â¬â ¢s name under duress, while everyone knows that if you drink poison, you either have to vomit to throw it out or bear the consequences. Knowing Lalu, he will not bear the consequences. He will throw out the poison so that Nitish will bear more than just the consequences. Congress has played the role of matchmaker due to its own compulsions. It has stopped making a mark in Bihar in last several elections. It needs the straw of this alliance to remain afloat. But this alliance of convenience is doomed to failure, as the many such experiments before it.

The real fun will start over seat sharing. It is very easy to say that Nitish will be candidate for chief minister. But when it comes to selecting candidates for individual seats, many factors come into play. Having conceded the top post to Nitish, Lalu will now want to bargain hard to have more MLAs in place in case there is a leadership tussle in future. Nitish, on the other hand, will want to consolidate his position in the assembly by having a majority of his people. Add to this the requirements of other allies like the Congress and the NCP and you have a situation that is waiting to go out of hand.

Further, it is very difficult to have ordinary workers who were fighting each other for the last so many years to change in a few months and start working together. Apart from built in mistrust, there are caste and communal factors that keep them at each othersÃ¢â¬â ¢ throats. Then, since the ordinary worker himself will not be convinced of the stability of the alliance, he will be unconvincing when explaining the same to the voters.

An alliance of local leaders with small parties at state level is in theory best placed to challenge and defeat big national parties in state elections. But theories falter when put in to practice. This alliance will give headaches to the BJP and force it to change its strategy in Bihar, but its stability is in doubt due to the frequent ego clashes between its top leadership.