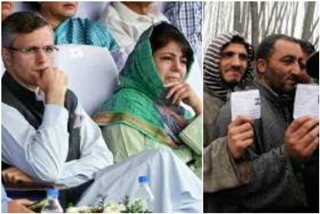 Although it is excellent news that several big political leaders in Jammu & Kashmir have decided to leave their parent parties - the PDP, the NC and the Congress - and form a new political outfit, it does not in any way obviate the need for releasing the leaders of the three main parties as early as possible in order to resume the political process in the state in real earnest. For, while the leaders who have decided to form the new party may have grassroots support, they are nowhere as charismatic as either Omar Abdullah or Mehbooba Mufti and might neither command a sizeable following nor represent mainstream political opinion in the state. They are also not expected to mould public opinion in a big way post the upheavals after the abrogation of Article 370.

The leaders of the proposed outfit have made the right noises until now. They have demanded full statehood for J&K and early panchayat elections. While the Centre might not yet concede the first demand as it wants to streamline the administration in the state under direct supervision, it should think seriously about the second. Any development in the state will only happen when the lowest tier of the elected representatives is in place. For, they are the ones who know what is needed in their respective areas, draft the schemes, get them approved, requisition funds and ensure that projects are completed. Hence, elected panchayats should be put in place at the earliest.

But any election held without PDP, NC and the Congress will not truly represent the will of the people. The three main parties have not shown any inclination to field candidates in panchayat elections under the present restrictions and with their frontline leaders in jail. They cannot be faulted for this as they are not able to hold political meetings and mobilize the people. Without that, the political process has no meaning. Hence, before holding the elections, the government needs to relax the restrictions in a phased but accelerated, manner to ensure proper participation of all parties. It also needs to release Abdullah and Mufti and other leaders. Maybe it can start with the second rung leaders and watch the developments and then release the top two.  But holding the elections in a relative political vacuum will be meaningless and can even backfire in the long run.