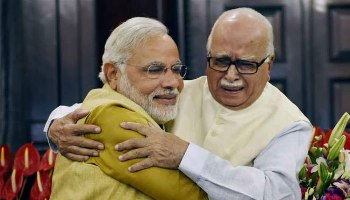 Advani's Blog: Outpourings Of A Disgruntled And Bitter Man

Advani's Blog: Outpourings Of A Disgruntled And Bitter Man

View all posts by this Author
It is both funny and disgusting to read LK Advanis latest blog piece that tries to show that he is a statesman and has the affairs of the country closest to his heart. It is nothing but the last outpouring of a disgruntled politician unable to stomach the change of guard in a party that he nurtured and tried to make his own. There is no doubt Advani worked tirelessly for the BJP. But since the results did not materialize, he was sidelined in a quest for fresh thinking and fresh leadership that could produce results. The 2009 defeat to the UPA was the last straw as Advani had become the face of the party and was rejected by the voters.

When Modis name started doing the round before the 2014 elections, Advani took the initiative to prevent that from happening. He tried it numerous times and finally resigned from all party posts once Narendra Modi was chosen to head the partys campaign for the elections, only to withdraw the resignations one day later. Did he think such vehement opposition would endear him to Modi? Did he think Modi would give him or his cohorts any bhav after single-handedly bringing the party to power with a record victory? He was obviously completely sidelined once Modi assumed power. This time he has been cut off from electoral politics as he has been denied a ticket in the ensuing elections.

But it is distressing that someone who undertook a highly dangerous rath yatra and led the karsevaks who demolished the Babri Masjid now says that for him the nation is first, the party is next and self is last. The idea of the rath yatra was to establish himself as the number one within the party and to establish the party as the only one that was for the Hindus. The nation was nowhere on his mind, otherwise, he would not have undertaken such a divisive yatra that left riots in its wake everywhere. For Advani, despite his stature in politics, it has always been self and party first, nation last. Further, his idea of the nation also was a Hindu nation.

The problem with Advani is that despite nursing a huge ambition to be the prime minister, he first encountered the giant Atal Behari Vajpayee and then lost his chance in 2009 as the party was defeated under his stewardship. He was finally mothballed by a younger and more charismatic Narendra Modi in 2014. Given his advancing age, if he is really the statesman that he claims to be, he should have gracefully accepted the change of guard and resigned from active politics in 2014. That he did not do so and allowed his younger comrades-in-arms like Shatrughan Sinha and Yashwant Sinha to lob grenades at the present party leadership shows how much bitterness he has in his heart.