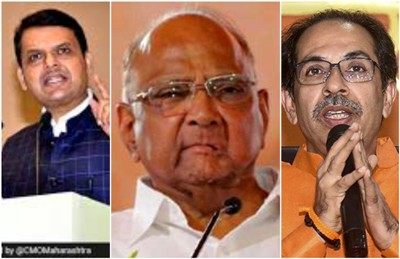 After All Games Play Out, It Will Be BJP-Shiv Sena Once More In Maharashtra

After All Games Play Out, It Will Be BJP-Shiv Sena Once More In Maharashtra

There are conflicting reports coming out of Delhi in respect of government formation in Maharashtra. First, a report said that the NCP was keen to form the government in alliance with the Shiv Sena with the Congress providing outside support. A few hours later, another report emerged which cited 'sources' to claim that Sonia Gandhi was totally against providing any kind of support to the Sena. In all this confusion, one thing is clear: the tiff between the BJP and the Sena has worsened with both parties hardening their stand and at least the Sena looking for other options.

The numbers that have been acquired by the respective parties permit just three situations. Only the BJP-Shiv Sena can form a stable government. The Sena-NCP government will depend on Congress support, or at least the party playing the neutral card. The third possibility is of the NCP joining hands with the BJP and shunting Shiv Sena out of the picture. That government will also be stable. But as of now, it does not seem Sharad Pawar would like to overlook local considerations by angering the Sena.

Both the NCP and the Shiv Sena are wary of the BJP as it has been making steady inroads in both their strongholds. Being regional parties, they would not like the BJP to hijack their core constituency. The Congress, on the other hand, would not want to have any truck with the Sena in these inflamed times. It knows that any hopes it has of a turnaround depends on secular votes and aligning with, or providing support to a party whose core agenda is regionalism laced with religion is fraught with danger.

But one feels that this is just a game being played for public consumption. Sharad Pawar is too wily a politician to form the government with the Sena. He knows it is an unpredictable ally. Instead, he will broker a deal between the BJP and the Sena and extract benefits for his party and for himself as he is being investigated for many offences by Central agencies. In the end, Maharashtra will once more see a BJP-Sena government, maybe with a Sena chief minister two and a half years from now. That the Sena wants this too is evident from its appeal to the RSS to intervene and settle the dispute.