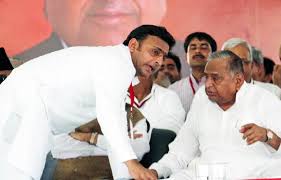 Editor-in-Chief of indiacommentary.com. Current Affairs analyst and political commentator. Writes for a number of publications. View all posts by this Author
Proving all calculations wrong, Akhilesh Yadav put together a massive show of strength a day after he was suspended from the Samajwadi Party. At a meeting of party legislators called by him, more than 200 turned up and vociferously supported him. That put a pin in the puffed up chest of Shivpal Yadav. Mulayam Singh Yadav was forced to accept realities and immediately revoked the suspension.

It is amazing how a seasoned politician like Mulayam allowed himself to be goaded by misguided advice and family machinations in suspending Akhilesh. Mulayam is known to have his ear to the ground. Did he not gauge the groundswell of support for Akhilesh among party legislators? Or did old age and love for second wife and brother Shivpal made him blind to all that?

As things are getting clearer now, the Yadav family war that has twice brought Samajwadi party on the verge of a split is mainly orchestrated by Mulayams second wife Sadhna. She wants a larger political role for her son Prateek. She has Shivpal on her side and both of them have been poisoning Mulayams ears with stories against Akhilesh. The patriarch has forgotten raj dharma and allowed himself to be used against Akhilesh.

But with the party and the legislators solidly behind Akhilesh, there is little Mulayam can do. For the first time in his political career, he was forced to yield his iron-like grip on the party and come to terms with the massive clout of his son. This reality check is good because it will perhaps make him keep away from family machinations.

With elections coming nearer, Samajwadi party needs to repair the damage done to its image by this washing of dirty family linen in public. A united SP, perhaps with an alliance with the Congress, could yet salvage something from a seemingly hopeless situation. Akhilesh has been pitching for that. But Mulayam wants to go alone. Maybe after his show of strength, Akhilesh will have his way.