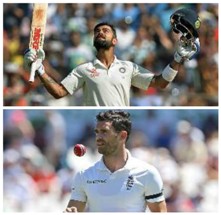 Editor-in-Chief of indiacommentary.com. Current Affairs analyst and political commentator. Writes for a number of publications. View all posts by this Author
Englands most successful bowler James Anderson has hinted that Virat Kohli is successful on Indian pitches because they hide his inadequacies  namely, playing the moving, away going ball badly  as pitches here do not support speed and movement. If one were to take this forward logically, isnt Anderson himself successful only where the ball moves and comes off the pitch with venom? To each his own, one can say. Anderson has been trained in the British school of movement where balls sway off the pitch at great speed when fast bowlers are plying their trade. Kohli has been trained on flat pitches that make the ball come on to the bat slowly, giving the batsman time to play. Both schools are as different from each other as chalk and cheese and there is no point complaining. Hence, both the exponents of cricket have tailored their games accordingly.

If Virat became Andersons bunny back in England due to pitches that helped Anderson, he took his revenge by treating Anderson with disdain on pitches that helped him in India. This is not to say Virat is successful only in India or Anderson only in England. Their records over their career spans are there for all to see. Great talents adjust their game by factoring in the conditions and the pitches. Over a period of time, they are successful in all conditions and on all surfaces. Otherwise, Anderson could not have taken those many wickets or Kohli would not have scored so many runs across all formats. If Anderson had come to India thinking he would carry on with his supposed advantage of having Kohli in his bag, he has little understanding of how the game is played in India and how Kohli has moved forward from what he was back in England. Is not a player allowed a series where he is off colour? All geniuses have a period when they seem to grapple with the ordinary and fail. England back in 2014 was a learning experience for Kohli. He failed there but learnt a lot. Kohli circa 2016 is a different player who is several notches above any other player on the circuit. Hence, Anderson cribbing about Indian pitches hiding his flaws is just the frustration of a player from the losing side. Arent Indian pitches highlighting Andersons flaws for that matter? Kohli has over 600 runs in the present series to prove it. Anderson, on the other hand, has taken a total of 4 wickets in as many Test matches. Struggling in India, are we Mr. Anderson?