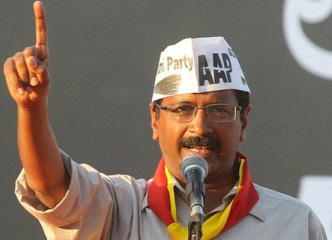 Editor-in-Chief of indiacommentary.com. Current Affairs analyst and political commentator. Writes for a number of publications. View all posts by this Author
First there was the megalomaniac chief. Now his lieutenants are showing their true colours. The rag-tag ensemble that Arvind Kejriwal managed to bring together by using Anna Hazares movement against corruption has finally been exposed. Behind the high moral ground that AAP sought to allocate to itself lies a face that is truly dangerous. From witch hunting Africans in Delhi to abusing the Sikh Holy book and from coming drunk to parliament to getting a sex tape released, AAP leaders are in no way different than the riff-raff that go by that name in other parties.

Even Anna Hazare has reacted sharply to the Sandeep Kumar episode. Anna as said that he has lost all hopes he had with Arvind Kejriwal. Despite promising clean politics with spotless leaders, AAP has also fallen into the same trap of not checking on the antecedents of members in its hurry to spread its wings. The show of getting membership forms vetted was eyewash as criminals and loud-mouths are as much a part of AAP as they are of all other parties in India.

Kejriwal himself has always thought that no one knows better than him on all issues. His running feud with the Lieutenant Governor in Delhi and his broad asides at Modi are examples of megalomania. His frustration arises from the fact that despite winning Delhi, he has little power. But that was the constitutional position before the Delhi elections and will remain so till the territory gets full statehood. No amount of breast-beating by Kejriwal can change that fact.

As the Navjot Singh Sidhu episode showed, it is going to be increasingly difficult for AAP to strike deals with people who leave other parties. This is mainly due to the authoritarian streak in Kejriwal. The Mr KnowAll is fast becoming anathema to a wide spectrum of politicians. His brand of disruptive politics loses its relevance once the dramatis personae assume power. Kejriwal does not know how to govern. He only knows how not to let others govern. That is his biggest failing. In trying to seek what is constitutionally not his, he has abdicated the governance of Delhi and spends most of his time devising ways to fight with the Centre. This kind of politics has no place in India as the people of Punjab will let him know soon.