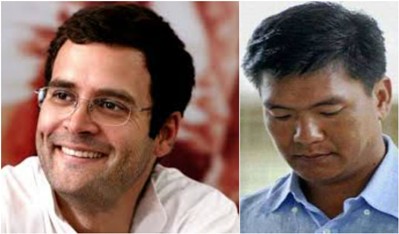 Editor-in-Chief of indiacommentary.com. Current Affairs analyst and political commentator. Writes for a number of publications. View all posts by this Author
As an act of politics, it was truly Machiavellian  one is talking about the replacement of Nabam Tuki with Pema Khandu as the Congress Legislature Party (CLP) leader in Arunachal Pradesh. At one stroke, it outfoxed and outmaneuvered the BJP and its handlers in the state. For, it was certain that the Congress would not have won the floor test if Tuki had remained the CLP leader. The rebels, who had gone against the party, were adamant that he resign. By affecting the change and getting back the support of the rebels, the Congress and Rahul Gandhi have shown that they are getting their mojo back, somewhat.

But two things emerge from this decision. First, why was the Congress high command, specifically Rahul Gandhi, unreceptive to the Arunachal rebel demand in November-December last year? If they had listened then, things would not have gone out of hand. The rebels had demanded the removal of Nabam Tuki at that time. Rahul Gandhi prevaricated, allowing things to drift and sent the rebels in the arms of the BJP. The sordid drama that played out in these nearly 9 months would have been avoided if Gandhi had taken a decision then.

Second, as the Supreme Court, in its order in the case Nabam Rebia & Bamang Felix v. Deputy Speaker & Ors, had said that status quo ante, as it prevailed on 15.12.2015, is ordered to be restored, does Nabam Tuki not taking a floor test in the assembly satisfy that order? Technically speaking, Nabam Tuki was chief minister as on 15.12.2015. So if he occupied the chair for even one minute after the above order came into effect, the legal provisions of the order are deemed to be satisfied. It is upon the Congress legislature party to either keep him or elect a new leader thereafter.

But given the murky goings-on in the state, which were outlined in detail by the Supreme Court in its above order, status quo ante meant restoring the position as it prevailed on 15.12.2015. The position then was that the Nabam Tuki-led Congress government had become a minority following the withdrawal of support by the rebels, who were then disqualified by the Speaker. Hence, to fully satisfy the reasoning behind the apex court order, would it not have been proper for Nabam Tuki to remain CLP leader till the time the floor test was over? This is something that has to be looked into by the Supreme Court.

But one thing is sure. The Congress has dealt a double blow to the BJP. First, it proved in court that the Governor acted unconstitutionally to remove its elected government in Arunachal Pradesh. Then, on the ground, it got its flock together again to leave the BJP red faced. In Indian politics, the winner often takes all. As the Congress won in court, there was a huge possibility of the rebels returning to the fold. The BJP erred in not anticipating this and strategizing accordingly.

Install Flipkart App to shop and get deals and discounts