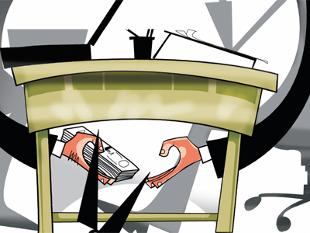 Editor-in-Chief of indiacommentary.com. Current Affairs analyst and political commentator. Writes for a number of publications. View all posts by this Author
picture courtesy: the economic times

If corruption has to be weeded out in any country, the process has to start at the top. It is a fact that corruption at the grassroots often stems from the attitude of those at the highest levels. The NDA government has displayed a zero tolerance policy towards corruption and big ticket scams have almost vanished. But lower level corruption is still endemic. Nothing moves in India without greasing the palms of those in authority. Even a lowly peon expects his cut. Officers in government offices often display helplessness as the peon does not bring the required file to their table if the party concerned does not pay him a bakshish. It is not a secret that upar ki kamai is often the status symbol of government employees. It is against this backdrop that the decision of the government to dilute the Lokpal Act by amending the clause that mandated for its employees to declare their own and their familys assets by July 31 by keeping it in abeyance is particularly disturbing.

The disclosure of assets of self and family by government employees is very much needed to identify such persons who are maintaining a lifestyle clearly at odds with their known sources of income. Those government employees who are not corrupt but have got genuine assets either through bequests or earning capacities of other family members should have no problems with this disclosure. It is the corrupt who will raise a hue and cry regarding this. Although there can be no direct correlation between assets and corruption, it is definitely a pointer and can be used for further investigations. This is what is troubling corrupt employees. The government should not give in to such demands and if it serious about making India corruption-free, it should get this disclosure done in the near future.