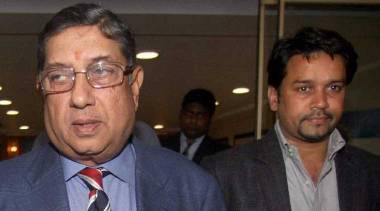 Editor-in-Chief of indiacommentary.com. Current Affairs analyst and political commentator. Writes for a number of publications. View all posts by this Author
Are those who ran the BCCI as their personal fiefdom planning to start a parallel body to administer the game in India after the Supreme Court order that has rendered most of them unfit to occupy posts in the present setup? A group of 24 or more such disgruntled persons, Lodha expellees all, met at a private meeting in Bengaluru a few days back. It was just a fishing expedition with no set agenda. Apart from Anurag Thakur and N Srinivasan, and perhaps Rajeev Shukla the IPL chairman, most others must have attended for curiositys sake as none of them has the clout to influence decisions one way or the other.

But the attendance, and reported bonhomie, between two avowed enemies like Thakur and Srinivasan does point to the fact that apart from testing waters, these two are hatching something together. Srinivasan is an old hand and some say that despite being forced out of the BCCI top job by the apex court, he continues to wield enormous clout within the body. He had bestowed enough favours during his term and owns innumerable IOUs. Many state association office-holders owe their position to him. He is expected to encash all the notes if a parallel body is formed.

But given the fact that the Supreme Court is fully focused in cleaning up the BCCIs act, one does not think much will be achieved by floating a parallel body to administer the game by the Lodha expellees, if they do float one. Neither the players nor the ICC is going to do anything that will make them break any laws in India. As of now, BCCI is the recognized body to run cricket in the country. For the time being, it might be administered by court appointed observers. But finally, when the Lodha Committee recommendations are fully implemented, elections to all state units and the central body will be held as per the new rules and things would be back to normal  with additional transparency and accountability.

What these disgruntled, former administrators might achieve is create hurdles in the short run. Already, the Tamil Nadu Cricket Association, which is run as a personal fiefdom by Srinivasan, has written to the BCCI that given domestic commitments, it will be unable to host two under-19 Test matches with the visiting English under-19 team at the Chepauk in Chennai. But these cheap tactics are not going to take them anywhere. They are just showing how their minds run and how they will stoop to any level to protect their turf. The Lodha expellees fail to understand that the game of cricket is not to remain as the turf or fiefdom of a selected few where activities are shrouded in mystery and there is no accountability.