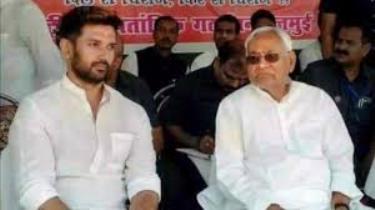 Bihar: Bare Knuckled Fight Between The JD(U) And The LJP

Bihar: Bare Knuckled Fight Between The JD(U) And The LJP

The NDA is experiencing problems in the alliance in Bihar. The dispute is between Nitish Kumar's JD(U) and Ram Bilas Paswan's LJP. Although the point of contention at present is the post of chief minister as the LJP is against having Nitish Kumar as the face of the alliance, the feud goes back in time when Kumar declared several backward communities as Mahadalit but initially left out the Paswan's, the main constituency of the LJP. They were included only in April 2018.

Many observers feel that with its influence all but vanishing in Bihar, the LJP is posturing in order to get tickets to fight the elections on more seats. But since it won just two seats in the 2015 assembly elections, it is highly unlikely that either the JD(U) or the BJP will grant that. In a stinging riposte to the LJP demand, K C Tyagi, the JD(U) general secretary said yesterday that the "NDA will contest elections under Nitish Kumar. There should not be any confusion on that score. LJP is free to walk out if it wants to."

This shows the extent of animosity between the two parties. It also shows that despite Ram Bilas Paswan's stature as a senior leader, it is the votes and the seats that finally count and on that score, the LJP is way down the ladder and is dispensable in most scenarios. But that has not deterred both Ram Bilas Paswan and his son Chirag (who has taken over the reins for all practical purposes) from needling Kumar since the last two years over poor governance, the migrant workers' issue, the handling of the Covid situation and the lack of relief work during the floods.

The parliamentary board of the LJP met on Monday, September 7 but failed to take a call (highlighting the dilemma it faces) and left it to the party president Chirag Paswan to take the final call on whether to fight the elections with the JD(U) in the NDA alliance. Meanwhile, the party has decided to finalize candidates for 143 seats. There are very few options left with the LJP as it knows that if it goes alone, it might not win even a single seat. There is no constituency in Bihar where the LJP can win alone.

The JD(U), meanwhile, has the full backing of the BJP (although some BJP leaders are inclined to think that the time has come for the party to assert itself more forcefully, meaning that it should go solo) and with both Amit Shah and J P Nadda having reposed faith in Nitish Kumar's leadership, it knows that the LJP does not matter. Kumar knows that the BJP and the JD(U) together will beat anti-incumbency as the opposition parties are in disarray. Although Tejeshwi Yadav spews venom at Nitish Kumar, the RJD does not have the caste arithmetic with it and it cannot even swear by the Muslim votes now. Given the current scenario, it seems that the NDA will come back to power.