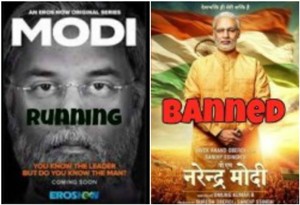 Linus tackles things head-on. He takes sides in his analysis and it fits excellently with our editorial policy. No 'maybe's' and 'allegedly' for him, only things in black and white. View all posts by this Author
It is surprising that the Election Commission has delayed the release of the film PM Narendra Modi until after the elections and yet not taken any action against the web series Modi that is being aired on the digital platform Eros Now. The series is also being advertised on the digital media.

This amounts to discrimination against one medium. It also makes a complete mockery of the ban order since the content and the idea behind both the film and the web series are exactly similar. Only the medium, the producers, the cast and the crew are different.

It can be argued that the viewership of the web series is limited whereas the film would have been released across the country on more than 3000 screens. Also, the publicity for the film would have meant that one party and its leader would have got huge free publicity over all mediums. But if the idea is to prevent voters from being influenced, then the principle should be applied similarly to everything irrespective of how many voters are influenced.

The Trinamool Congress has already raised this issue with the EC. With the internet being increasingly accessed on mobile phones, web series are becoming the preferred mode of entertainment viewing for a large number of Indians. The convenience of viewing wherever one wants to  during the commute from office to home or vice versa, for instance  is making it even more popular. Hence, if the film is banned, ideally the web series must also be taken off.

But as the mediums have multiplied, it is becoming impossible for the EC to keep track of things. If someone were to show the banned film on a YouTube channel, two hours is all it will take for thousands of people to see it. There will also be hundreds of downloads in that period. These downloads will be shared and the very purpose of banning the film will be defeated. What action will the EC take if the film is burned on CDs and distributed free to voters by unidentified people?