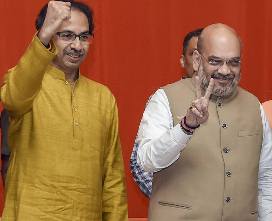 Editor-in-Chief of indiacommentary.com. Current Affairs analyst and political commentator. Writes for a number of publications. View all posts by this Author
Cornered by most allies, when BJP president Amit Shah boards the flight from Mumbai he might congratulate himself on a job well done. He has managed to keep the Shiv Sena, the most stridently critical of all allies, in the fold by thrashing out a seat-sharing agreement whereby the BJP will fight from 25 Maharashtra Lok Sabha seats and the Sena from the balance of the 48 seats in the state. In the state polls, both parties agreed on a 50:50 formula after accommodating smaller parties in the alliance. The state has 288 assembly seats. On the face of it, it looks a fair agreement as in 2014, the BJP had won 23 and the Sena 18 Lok Sabha seats in the state. In the state assembly, the BJP had won 122 to the Sena's 63. But the question being asked is why the BJP was so accommodative (it could have limited the Shiv Sena to only the number of seats it had won last time) with an ally that was increasingly acting as an opposition?

Uddhav Thackeray has, in the recent past, never missed a single opportunity to needle the BJP in general and the Modi-Shah duo in particular. Starting with demonetization (before that, there was muted criticism), the tone and tenor of his criticism had assumed a stridency which is at best not normally associated with an ally and at worst is the outpouring of an outright opponent. In the worst instance of discord, he even borrowed Rahul Gandhis words and used chowkidaar chor hai by camouflaging it in a made-up story to launch a veiled attack on PM Modi over the Rafale deal. Every passing day seemed to embolden him to make even stronger attacks on the BJP.

Yet, when the time came, Shah was left with no other alternative but to share seats in a manner that shows that the Sena has emerged with the upper hand. If things were good for the BJP, Shah would not have conceded more than the 18 seats that the Sena had won in 2014. But things, as shown by recent opinion polls and the rumblings of other allies, are not very good for the party. There were several things that Shah had to consider that made him forgive and forget all the slights heaped by the Sena chief in the past. The Shiv Sena is the oldest, and in terms of number of seats in the NDA, the biggest ally that the BJP has. It has also been the most vocal. If it could be placated, a signal would go down that the BJP has shed its haughtiness and was willing to meet allies more than half-way. That would perhaps placate the other allies. This was the biggest reason that made Shah bend more than he would have liked. The other reasons were the need to silence the criticism as the elections are fast approaching and to latch on to every single seat that can be won in the face of the loss of popularity as shown by the opinion polls.