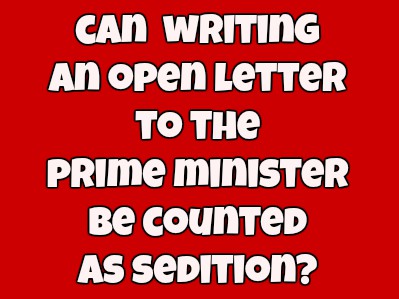 Booking Celebrities For Sedition: Where Will This Lead To?

Booking Celebrities For Sedition: Where Will This Lead To?

Does writing an open letter to the Prime Minister of the country highlighting certain unpunished criminal acts amount to sedition? Yes, if an FIR lodged in Bhagalpur in Bihar is to be believed. The police in Bhagalpur has registered an FIR against 49 celebrities, including filmmaker Adoor Gopalakrishnan and historian Ram Chandra Guha, among others, for writing an open letter to PM Modi in July this year where they regretted the fact that mobs were lynching people over religion and food habits and these acts were going unpunished.

When things happen in a nation, there will be hundreds of different views. Some people will support the acts, either passively or actively while others will remain neutral. But there will always be a minority (or even a majority) that will not support the acts and will protest against them, again either through words or by even actively resisting the miscreants. But none of the above can be truly called sedition, which is defined as "conduct or speech inciting people to rebel against the authority of the state". But as the ruling dispensation becomes more allergic to the dissenting view, the definition of sedition will become dangerously narrow.

But can the open letter that was written to the Prime Minister count as conduct or speech inciting people to rebel against the authority of the state? It was an earnest attempt by thinking Indians to put across their views to the highest authority in the government about something that was happening with alarming regularity in the country which they did not like. They just pointed out that such barbaric acts tarnished the nationâs image and the perpetrators should be punished and the Prime Minister should speak out against such acts. It was an appeal from the heart and there was no sedition involved.

If such dissenting view and appeal for sanity are to be considered sedition then no civil dialogue is possible. The letter did not tell the Prime Minister that if he did not act or if the administration did not act the writers would take the law in their hands and stop the miscreants. It asked the Prime Minister to use his office to put a stop to the heinous crime. There is nothing wrong with that and the signatories did not break any law. The Bihar police should immediately withdraw the FIR and desist from registering such FIRs before understanding the matter.